School board receives flood of comments on operations after… 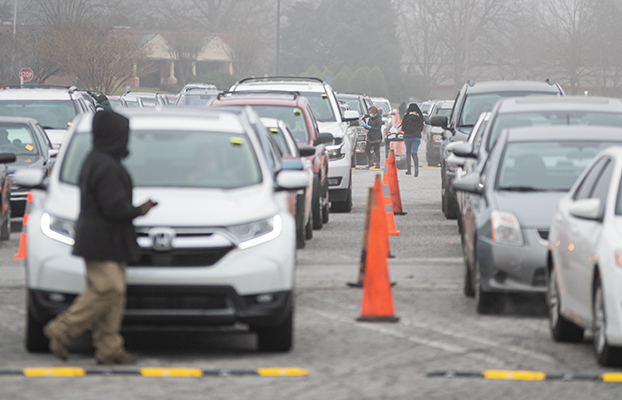 SALISBURY — The state will have fewer vaccine doses to allocate for the next few weeks after using up a reserve supply, but state officials said Tuesday they will offer a degree of certainty to local providers dealing with varying shipment sizes.

During a news conference, N.C. Department of Health and Human Services Secretary Mandy Cohen said the state for the next three weeks will reserve 84,000 doses of a 120,000-dose supply for local providers giving first shots. The remaining doses will be used to balance out supplies for underserved and historically marginalized communities.

As part of that plan, Cohen said, the state told local providers the number of vaccines they will receive for the next three weeks will be balanced based on population. The Rowan County Health Department said Tuesday it hadn’t received a notification.The Rowan Health Department expects to receive an unknown size allocation Thursday or Friday for use next week.

The updated vaccine plan comes as state officials have used reserve vaccine supplies to show the federal government that “North Carolina is ready to take on more vaccine and needs those vaccines now,” Cohen said. She said local vaccine providers are being asked to exhaust their first dose supplies after receiving them, too. Of the 667,350 first doses that have arrived in the state 630,774, or 95%, have been administered.

In the previous week, Cohen said, providers administered about 260,000 vaccines. So, the 120,000 available for the immediate future will “feel particularly tight, with many providers getting small or no allocations.”

After administering hundreds of vaccines last week, Rowan County has just 300 doses to administer during its drive-thru clinic today. It will also begin administering second doses Thursday as part of a separate supply.

Cohen and Democratic Gov. Roy Cooper have pinned the recent vaccine instability on the federal government. Local officials, in turn, have criticized the state for creating a distribution system it believes is ever-changing, poorly communicated and inequitable.

In a letter released publicly this week, Oliver said the 300 doses were less than one-third of what the Rowan Health Department fought to receive. Local physicians and pharmacists are willing to volunteer their time to help with distribution, but vaccine availability is limiting their ability to do so, Oliver wrote.

And while Rowan County received just 300 doses for use today, there were roughly 16,000 doses administered at the Charlotte Motor Speedway on Friday through Sunday. Tens of thousands are expected for an event at Bank of America Stadium this weekend.

Asked during a news conference about the state’s decision to provide vaccines to large sites and the effect on rural communities, Cohen said a mix of strategies will be needed to make sure people are getting vaccinated. Cohen admitted some areas received larger supplies of vaccines than others because of an effort to quickly exhaust reserves.

She noted the N.C. Department of Transportation and N.C. Department of Health and Human Services has allocated $2.5 million in coronavirus relief funding to distribute to local transit agencies that transport people to vaccine sites.

President Joe Biden’s administration will raise the minimum weekly supply to states over the next three weeks from 8.6 million to 10 million, or by 16%. Cohen said on Tuesday afternoon that it’s not yet clear what North Carolina’s new supply count will be. But with nearly all supplies exhausted and more mass vaccination events forthcoming, thousands of North Carolinians with postponed appointments could see further delays.