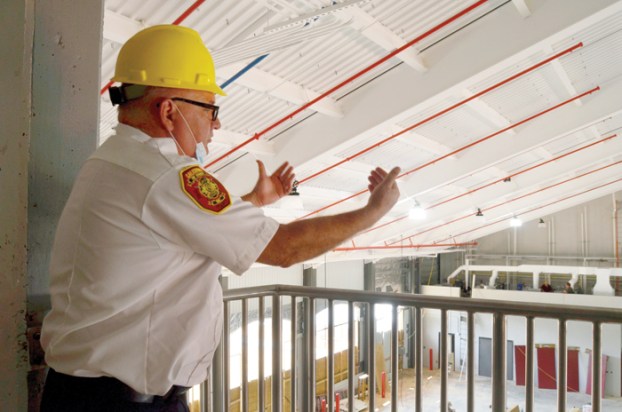 The Salisbury Fire Department will debut its new Fire Station No. 6 to the public on Sunday.

A virtual Open House link will be available at salisburync.gov/Fire, where “attendees” can tour the new fire station online and view the live dedication beginning at 2 p.m.

Physically located at 310 Cedar Springs Road, the station is named after Justin Monroe and Victor Isler, two members of the Salisbury Fire Department who died in the line of duty in 2008. Members of both families will be present for the dedication and receive an in-person tour of the facility.

“The new station is a result of a significant commitment by the City Council and city management in terms of providing the highest possible levels of public safety to our citizens,” said Salisbury Fire Chief Bob Parnell. “We are very proud of the new building and more so the rapid response times we can now provide to the southern parts of the city. The new engine company housed there is a full-time, 24-hour fire and EMT response team with specialization in hazardous materials emergencies.”

The Monroe and Isler Fire Station is many years in the making. Planning for the new station began in 2017 to serve the entire city of Salisbury, though primarily to cover its own fire response district — the incorporated areas south of the Mid Carolina Airport. Those areas include Camp Road, Long Meadow Drive, Grace Church Road, Airport Road and the neighborhoods of Stoney Brook, Kings Forrest, Matika Village, Little Acres, Weatherstone and the Long Meadow Industrial Park. The facility also houses a training wing, the hazmat team and the fire operations staff.

To facilitate the construction of the fire station, the Salisbury Fire Department identified approximately six acres of undeveloped property along Cedar Springs Road, just west of U.S. 29 South. This site provides access to all the main roads to facilitate timely emergency response, while the acreage offers plenty of space for the station and a significant natural buffer all around.