RSS administration will recommend plan A for middle, high… 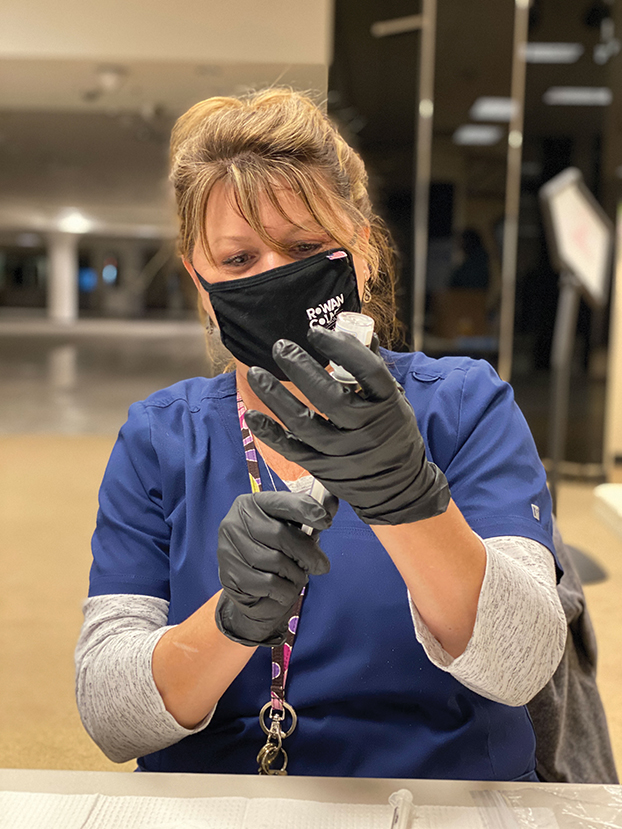 SALISBURY — In a spacious room that was once filled with clothing racks, shoes and perfume, dozens of nurses, Rowan County staff members and volunteers hustle to clean equipment, input information on computers and rush vials of vaccine out of the door.

Since Rowan County purchased the Salisbury Mall in 2013, the former J.C. Penney building, now called the “event center,” has been the site of everything from knife shows to book shops. For the previous several months, the 33,800-square-foot room has become the site of something more important: the command center for the Health Department’s COVID-19 vaccination clinics.

“It’s been essential,” said Alyssa Harris, interim health director. “We could not do what we are doing without the space that the West End Plaza offers and the internal structure that has allowed us to build out a robust vaccination plan.”

Before, during and after vaccine clinics, more than 60 staff members and volunteers use the building for morning meetings, to send reports to the state health department or as a place to unwind and eat a well-earned lunch.

The county’s nurses and staff members have spent hours inside the building over the past several months, but they’ve probably spent even more time in the parking lot outside. Under big white tents surrounded by a sea of bright orange cones, they’ve injected doses of Pfizer or Moderna into thousands of people’s arms.

When the Board of Commissioners decided to buy the declining Salisbury Mall a little over seven years ago, they wanted to own the building for a variety of reasons. None of those reasons included the role the building would play in a global pandemic.

Built in the mid-1980s, the Salisbury Mall was a popular shopping destination for several decades. That started to change in 2013 when J.C. Penney closed its doors. Big Lots had already moved from the mall and Belk relocated not long after, leaving the once bustling shopping center without its core tenants and largely devoid of activity.

The decline of traditional malls has been a common occurrence across the country over the past couple decades. A report published in 2017 by Wall Street firm Credit Suisse projected that 20% to 25% of malls, roughly 220 to 275 shopping centers, will be shut down by 2022. While some major shopping centers are still hanging on, others have already been demolished or repurposed. The Rowan County Board of Commissioners preserved the skeleton of the Salisbury Mall when they authorized the purchase of the property for $3.4 million in December of 2013.

Three of the five commissioners who were on the board at the time are no longer serving. Commissioner Craig Pierce, who voted in favor of purchasing the property, remembers the reasons why.

“Still today, we have space needs that haven’t been met and we saw (West End Plaza) as an opportunity to have all of our governmental offices in one roof so if you needed something that concerned the county, you’d have one location to go to,” Pierce said. “The other thing too was we did not want to see that end of the county go derelict.”

Pierce said he’d seen the impact a dilapidated mall can have on the area around it and wanted to prevent that at all costs.

The decision to buy the Salisbury Mall, unanimous among commissioners, was a divisive issue in the county. Commissioner Judy Klusman said that it’s one of the reasons why she became interested in getting involved in Rowan County politics in the first place.

One of Klusman’s main concerns, she said, was how much money the county spent buying the building and how much it would have to spend to renovate it. The county paid $1.2 million for a roof replacement in 2016 and 2017 that took almost a year to complete.

“It cost a lot more money than the previous board said it would to update it and it began with the HVAC system on the roof,” Klusman said. “When we did that, we put a new roof on because it had a lot of leaks.”

When the Rowan County Board of Elections and Veterans Services moved into the space in 2017, the county paid $416,000 for renovations to make the building suitable for their offices.

While both of those projects have been paid off, Rowan County Finance Director Jim Howden said the county is still $1.58 million away from paying off the loan it used to originally purchase the Salisbury Mall. The county pays roughly $436,000 in principal and interest each year, Howden said.

Several plans for West End Plaza have percolated over the years. At one time, there were discussions about moving Social Services — the county’s largest department — and the Health Department into the space. Commissioners talked about giving the Sheriff’s Office space at the former mall, but those plans never came to fruition.

In architectural fees, the county has spent $214,137 on West End Plaza, Howden said. Part of that money went toward the development of a study and master plan to determine the best use of the building. The remainder was spent on a plan developed by ADW Architects in Charlotte that would cost the county $18.93 million to transform West End Plaza into an “agricultural center” and have several county agencies move into the building.

Several commissioners said the county was poised to take action on those plans when the COVID-19 pandemic began, but they implemented a moratorium on capital projects that would cost the county large chunks of money.

Even though West End Plaza has already cost the county millions of dollars, the facility generates some money. The building’s remaining tenants, including Badcock Home and Furniture, Bath and Body Works, Dollar Tree, GQ Men’s Wear and two ATMs, generate roughly $350,000 per year in rent payments, which Howden said goes directly toward paying off the county’s debt on the building.

Prior to the pandemic, the county was also bringing in about $30,000 per year in rental fees from events held in the former J.C. Penney building.

Those events have largely ceased since the pandemic began, and the event center has become a much-needed headquarters for a more pressing cause — the Health Department’s COVID-19 testing and vaccination clinics.

When the Health Department initially began testing people for COVID-19, it initially started in the parking lot of its building — 1811 E. Innes St.

The building’s parking lot, however, wasn’t large enough to accommodate the number of cars that flooded to the testing site when case numbers started rapidly rising. Looking for other options, county leaders quickly zeroed in on the West End Plaza. Not only did the former mall have ample parking, but it also boasted room inside the J.C. Penney building.

“Once capacity reached its peak in November and December, we realized we had to up the ante when it came to testing,” Harris said.

The testing site returned to the Health Department’s main facility when the county started distributing vaccines.

The Health Department worked through several models of distributing vaccines, but has now settled into a groove with an efficient appointment-based system. The county has fully vaccinated 13,530 people, or 9.5% of the county’s population, thus far. A large portion of those people received their shots while in their cars at the West End Plaza parking lot. 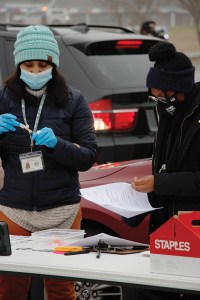 Ann Mathew and Jaleesa Smoot work to distribute vaccines during a clinic at West End Plaza in January. Photo courtesy of Rowan County.

Harris said the visibility and name recognition provided by the West End Plaza has been an additional benefit of having clinics at the building. Its geographical location has also been an advantage, she said. While Rowan County’s natural geography presents challenges of reaching the entire population, Harris said that West End Plaza is “not the perfect spot for everyone, but it’s a great spot for a lot of people.”

Seeing how the West End Plaza has served as a site for COVID-19 vaccinations, Pierce said, makes him glad the county bought the property.

“It’s been very fortuitous for us during this pandemic to have that space to operate to do the things to take care of our citizens,” Pierce said. “Is it worth the money we spent, that would be hard for me to say yes or no, but if it saves lives, then it’s worth every penny.”

To Commissioners Chairman Greg Edds, the key role that the West End Plaza has played in the county’s COVID-19 response portends how useful the building could be in the future.

“COVID and other things have really shown us the value of that facility,” Edds said. “Providing an updated, real-well-thought-out and usable facility out there is going to be a great asset for the community that can be enjoyed for the next generation.”

Expecting the county’s tax revenue to dip as a result of the pandemic, the Rowan County Board of Commissioners instituted a moratorium on capital projects last spring. With the county’s most recent sales and property tax numbers looking surprisingly positive, commissioners may consider lifting the moratorium in the near future, Edds said.

That doesn’t necessarily mean that they’ll be ready to spend millions of dollars to turn West End Plaza into an agricultural center.

“Until we come out the other side of COVID and see how that’s going to affect us financially, as far as sales tax revenues and property tax revenues and those things, it’s hard to convince yourself to put $20 million on the line,” Pierce said.

Klusman, who said she is still interested in turning the space into an agricultural center and department offices, is now looking forward to the future of the building she didn’t want the county to purchase in the first place.

“I think it has great potential,” Klusman said. “The plans that our architects have put together are wonderful. I’m very, very excited that we will have a place that’s the space that’s needed for our different departments.”

Edds views West End Plaza as one of several “monumental” upcoming projects that will be transformative for the county.

“When you can build facilities that help change lives, folks can experience capital projects and get enjoyment for education and improve their lives, those are the things that are really exciting,” Edds said.

“What I foresee is fixing a building that will be able to seat 300-500 people and will be used by big corporations and small corporations and for weddings and all kinds of things,” Greene said. “We have a lot of great things that can happen at that facility. My personal feeling is that it’s going to be one of the best county assets. It may be 10 years from now before anything gets done, I can’t tell you that. But it’s been proved over the last two years what a great location it is and how the community uses it.”

For now, West End Plaza will continue to serve as the place where nurses, health officials and county staff members and volunteers work diligently to vaccinate the county’s population.