Spirit of Rowan: Jenny Lee is working toward a… 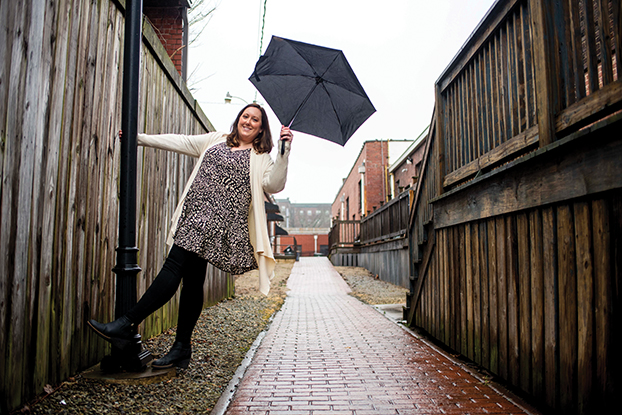 In search of a new car, Mollie Ruf went to a Jeep dealership in Concord. It was a Sunday afternoon in 2014 and she didn’t even know the dealership was open. But when Ruf started peering into a black Wrangler, a salesperson appeared.

The Wrangler looked like any other, except the large body of a white dragon snaked from passenger door to hood and the inside was covered in serpentine accents.

“I think they were having trouble selling it, so I was like, ‘Well, I don’t know it’s got all this dragon stuff on it,’ ” Ruf said. “I secretly liked it, but played it down and they threw in all this free stuff.”

Ruf drove the special-edition Jeep off the lot and has been cruising around Salisbury in it ever since.

People have come to recognize her for her unique car, but she’s also well-known for her work with Rowan County Tourism, Downtown Salisbury, Inc. and most recently as digital services director for Miller Davis marketing agency. An ardent supporter of local brands, Ruf has worked in those positions to promote countless businesses and organizations in Rowan County.

“There’s no anonymity for me in Rowan County,” Ruf said.

She wouldn’t have it any other way.

Driving a dragon Jeep and working in marketing is not what Ruf would have imagined for herself when she was a shy, musically inclined kid growing up in suburban Kansas City.

While she wasn’t afraid to take the stage to belt out operatic notes, Ruf found herself petrified at large family gatherings. Overcoming her inherent shyness, Ruf said, was a years-long process. In an effort to break out of her shell, Ruf left Kansas City after high school to attend Florida Southern College. Having spent years training as an opera singer, she majored in voice performance her first semester at FSC.

Suddenly, she had a change of heart.

“I had this thing that I was always on the path to do, but it just didn’t feel right,” Ruf said.

Through conversations with her mom, Ruf decided that a career in public relations might suit her best. She switched her major and never looked back.

After graduating in 2009, Ruf followed her now husband J.R. Kessler to Salisbury, where he was carving out a path for himself in motor racing. Unable to find a local marketing job during the economic recession, Ruf worked jobs in Charlotte and Statesville for several years. She was eventually hired by Rowan County Tourism Director James Meacham to serve in a dual role for both Downtown Salisbury, Inc. and the Rowan County Tourism.

Ruf earned a reputation as an “event jedi” for the countless events she hosted in downtown Salisbury and built relationships with business owners and stakeholders at the heart of town.

She carried those relationships with her when she was hired at Miller Davis marketing agency in 2016.

“I met a lot of great people all over Rowan County during my time with Downtown Salisbury and the Tourism Development Authority and it has helped me grow and drive business to Miller Davis because people knew my work ethic,” Ruf said. “They could count on me to get the job done and do it right. That’s something I really pride myself in.”

Ruf has continued to take on more responsibility at Miller Davis and currently oversees a digital services team of six employees who help market local organizations and businesses like the N.C. Transportation Museum and Patterson Farm.

She’s been especially busy during the COVID-19 pandemic as businesses have scrambled to establish or expand their online presence.

“It’s been full throttle,” Ruf said. “Businesses who never cared about their website before or even had a website, now all of the sudden that’s a non-negotiable. You have to have a digital presence.”

One of her proudest accomplishments, Ruf said, was working with Rowan County Tourism last year to help create business resource kits for companies struggling through the pandemic.

Ruf, who models her work ethic after her father, hopes to spend her career at Miller Davis helping the local companies she passionately supports.

A self-described “workaholic,” Ruf’s dragon Jeep can be seen in the parking lot across from Miller Davis well after business hours.

When she’s not working for Miller Davis, Ruf, 34, is helping organize the Rowan Young Professionals Group to support other people like her who are seeking to advance their careers in Rowan County.