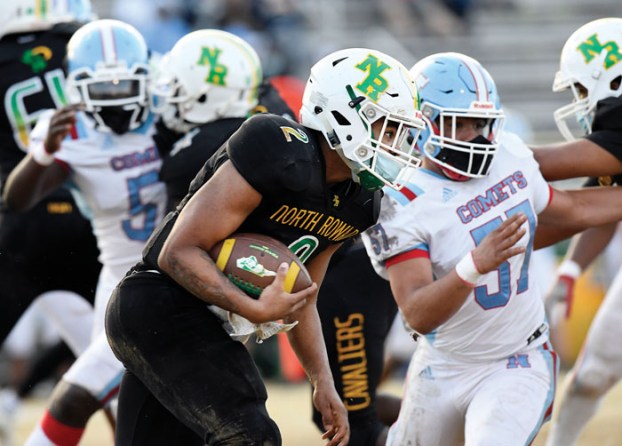 North Rowan's Kyree Sims has scored a dozen touchdowns for the Cavaliers this season. File photo by Wayne Hinshaw, for the Salisbury Post

That’s because he spent his early days in football as a right tackle. He got started in the fourth grade.

“I won a throwing competition with Coach Hamp when I was a sophomore,” Sims said. “After that, I was a quarterback.”

He was the starter for the Cavaliers as a junior in a 9-4 2019 season that included a playoff victory. North’s biggest stars were senior back Malcolm Wilson and senior linebacker Jordan Goodine. Sims’ personal season was a roller coaster, but there were more ups than downs. He threw 10 TD passes, with seven interceptions. He also ran for four TDs. He gave the Cavaliers a dual-threat quarterback, which is just about essential these days.

Knowing he had a returning starter at quarterback was a source of comfort to new head coach Nygel Pearson, as he took the reins of the Cavaliers.

Sims played basketball, which came right before football in this year’s modified schedule, but he says that wasn’t an obstacle.

“It wasn’t hard at all,” Sims said. “The coaches did everything they could to help me do my best in both sports.”

North hadn’t really enjoyed a big passing game all season until Monday night when the Cavaliers won 59-0 at South Davidson.

The five-TD outburst was the biggest game of Sims’ career.  It was the second time he’s thrown three TD passes. It was the fourth time he’s run for two TDs. But he’d never put it all together on the same night.

“We know he’s going to run the ball well for us,” Pearson said. “But it was good get him going in the passing game. We’ve got some talented receivers, and he was able to get the ball to them in space.”

Sims scored the first TD of Monday’s game on a 20-yard run.

“Just a basic read option play, and I kept it and out-ran them,” Sims said. “Some good blocks helped a lot.”

North’s second score came after a short flip from Sims to tall sophomore Amari McArthur. McArthur made several tacklers miss near the sideline and turned an innocent-looking play into a 60-yard touchdown circus.

“I read the corner and got it to him and Amari did his thing,” Sims said.

North achieved its third TD in the closing seconds of the first half on the legs of freshman Jameas Morrow. That proved a backbreaker for South Davidson.

“We actually started out pretty slow,” Pearson said. “Easter Monday game, and the kids not in school. It took a while to get going. But that touchdown before the half got everyone up. It was like, ‘OK, we’re in a football game,’ Then we played an excellent second half.”

Sims was a big part of that second-half excellence. McArthur caught his second TD of the night and third of the season. Orion Harris got his first TD catch.

“I’m pretty fast, but not that fast,” Sims said with a laugh. “Great blocks.  I just followed them.”

Part of Monday’s huge rushing game by Sims was the absence of normal leading rusher Zay Davis (illness) and a concussion sustained by Ronnie Fennell, who normally gets most of the carries that Davis doesn’t.

But Morrow had a breakout night, while Sims showed that he’s a quarterback who can turn into a running back when necessary.

Pearson liked the footwork, but mostly he liked the potential that Sims showed with his arm on Monday.

“If he’s able to throw the ball consistently, we’re a lot harder team to defend and teams can’t load the box against us,” Pearson said. “Kyree’s passing is going to be really important to us in the playoffs.”

The Cavaliers (4-2) will find out their next opponent on Saturday.