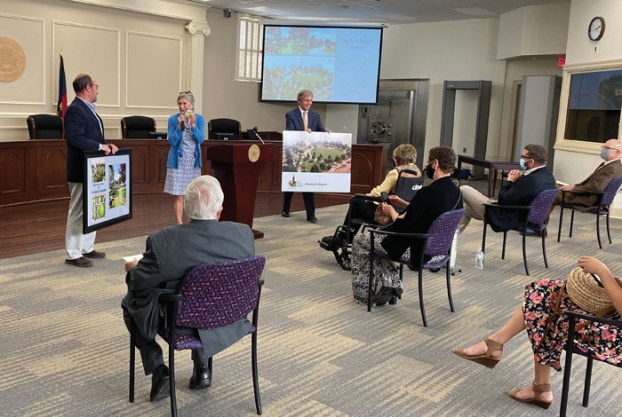 Photo submitted - Margaret Kluttz, center, speaks during a presentation last week adding to the new downtown park’s name. It will now be Bell Tower Green at Stanback Square. To her left is Jason Walser. Dyke Messinger is to her right.

SALISBURY — Downtown Salisbury’s new park has been renamed to honor a prominent philanthropic family that has spearheaded support for its creation.

Bell Tower Green Park will now be called “Bell Tower Green at Stanback Square” to reflect the significant contributions made to the park’s construction by Nancy Stanback, her late husband Bill, and Fred and Alice Stanback. Bill and Fred were cousins and longtime business partners.

The renaming was announced during a ceremony held Friday afternoon at City Hall during which Nancy was also presented with a framed key to the city by Mayor Karen Alexander.

“It was overwhelming,” Nancy said. “It really was. I was very touched. I think it brought me to tears. It was so kind of Karen Alexander to do that.”

The Stanbacks have been ardent supporters of Bell Tower Green from the beginning — when the park’s organizers were still trying to determine if they should move forward with their ambitious plans. 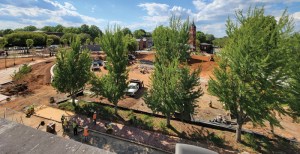 Josh Bergeron / Salisbury Post – A look at Bell tower Green Park from the roof of the Salisbury Post. For the previous few weeks, crews have been laying brick sidewalks and wroking on the Church Street side of the park.

About $12 million has since been raised for the creation of the park, which will feature a water wall, amphitheater, playground and ample green space.

Bell Tower Green President Dyke Messinger said the park’s board of directors thought it was fitting to rename the land between Church, Fisher, Jackson, and West Innes streets to recognize the Stanbacks’ support. Renaming the ground on which the park sits also doesn’t deviate from the board’s desire not to name individual parts of the park after people, Messinger said.

“The park couldn’t have been built to the design today without Nancy, Bill, Fred and Alice Stanback,” Messinger said. “They’ve been huge supporters all the way. They’ve challenged us to be smart with what we’re spending our money on to do it right and to scour the community with other investors.”

Messinger said Nancy continued to be a passionate champion for the park even after Bill passed in 2018. Walser said she has provided input on landscaping throughout the process.

“Her fingerprints will be on this park forevermore, just as Bill and Alice and Fred’s will as well,” Walser said.

The finished park will feature signage reflecting the “Stanback Square” location and the name will officially be designated on the deed that will be transferred to the city once the park is completed.

After a rainy few months to the start 2021, progress on Bell Tower Green has hastened thanks to dry, sunny weather in recent weeks. Messinger said he anticipates the park being opened to the public by July with an official opening ceremony held in September.

The renaming announcement came after Alexander presented Nancy with a key to the city, an honor she said doesn’t happen very often.

“We were so delighted that everyone could come together that day and make it a special event that focused on all the work Nancy and Bill had done, but particularly Nancy’s commitment since Bill’s death to continue that level of philanthropy for our community,” Alexander said.

Alexander gave a copy of a proclamation honoring Nancy to each of her six children. The ceremony also featured a speech from Salisbury Symphony Director Hunter Safrit, who thanked the Stanbacks for their contributions, and Rowan County Board of Commissioners Chairman Greg Edds and Vice Chairman Jim Greene. Commissioners recently recognized Nancy and Bill’s philanthropic efforts by renaming the observation deck at Dunn’s Mountain Park in their name.

The framed key to the city, Nancy said, is now stationed proudly on her mantle.

Nancy and Bill have donated to a variety of local charities and have supported numerous conservation and animal welfare projects, including the new Nina Dix Dog Adoption Center at the Rowan County Animal Shelter. Fred and Alice Stanback have backed various conservation efforts in the county, including the educational forest in Spencer that bears their name.