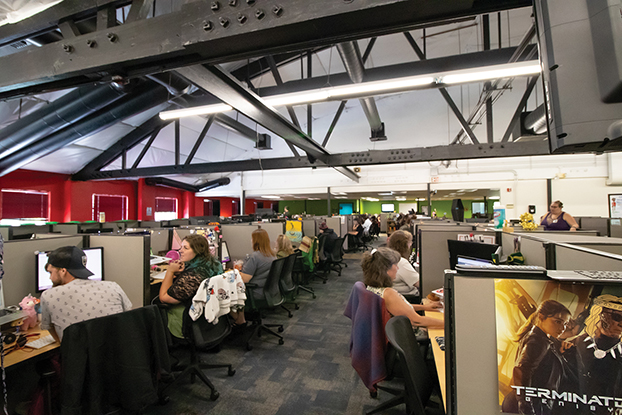 A look into one of FCR's facilities before the COVID-19 pandemic forced the company to go remote. Photo submitted.

SALISBURY — Without having ever stepped foot in Salisbury, Matthew Achak has already created several dozen jobs for residents in and around the city.

Achak is the president and co-founder of the Oregon-based outsource provider FCR, which recently announced its expansion into Rowan County. The company isn’t building a facility near Salisbury, yet, but has already hired about 30 employees who are working from the comfort of their homes.

Those newly hired employees, who had all necessary equipment shipped directly to their house, could be working to provide customer or technical support for any number of FCR’s clients, which include healthcare, tech and financial businesses. What differentiates FCR from the typical customer service operation, Achak said, is the type of work they offer their employees.

He said the company tries to provide jobs that he’d like to do.

“We’ve really been much more focused on what the work is,” Achak said. “Is it interesting? Are the companies fascinating? Is it work that has value to people’s lives? That’s the type of work we try to put in our small towns. You’re not going to see cable or something basic like magazines.”

Rowan County joins Detroit and Casper, Wyoming, as communities where FCR has expanded remotely during the pandemic.

Before COVID-19 forced many workers out of office spaces, FCR conducted business like most companies. Employees came to a building everyday and worked on computers near one another. Having people work in a shared space, Achak said, was how the company established its culture.

“If you look at Oregon, we’ve got five or six facilities that are beautiful buildings that people work in,” Achak said. “They have wonderful training rooms and breakout areas and hangout areas. We’ve always built the culture that way.”

But when its facilities were continually shut down after COVID-19 outbreaks occurred, FCR switched its approach and went to remote work full-time.

“This is a new concept that really our hand was forced to adapt to,” Achak said.

FCR didn’t just transition to a remote style of work at its existing facilities. It started to expand its footprint remotely, hiring workers outside of its established region of Oregon and Montana to work from where they are.

Although Achak believes employees can accomplish work from just about anywhere, he didn’t want to hire workers just anywhere. Achak said the company was very intentional about where it expanded remotely. One of its key objectives, he said, was finding diverse communities.

“We haven’t been the most diverse company so we’ve really tried to kick start that,” Achak said. “The Black Lives Matter movement helped us. Our focus initially was to target places that are much more diverse, let’s improve our diversity with the BIPOC (black, indigenous and people of color) movement and Black Lives Matter movement by going to places like Detroit, like North Carolina, like Tennessee.”

Although Salisbury’s robust internet infrastructure was one of the factors that attracted FCR to the area, Achak said it was the community’s demographic makeup, size and geographic location that truly put it over the top.

Since starting the hiring process about a month ago, FCR has hired several dozen employees in the Salisbury area. Achak said there’s not a set limit or target for how many people they want to eventually hire.

As time goes on and the pandemic continues to subside, Achak said he could even envision the company breaking ground and bringing a physical presence to Salisbury.

“Eventually, I think we would like to build there once we exit the pandemic,” Achak said. “How big? We just don’t know.”

Despite the reliance on remote work both in his own company and throughout the industry, Achak said he’s still keen on having a place for employees to go once conditions are safe again.

Whether his employees want the same thing is a different question.

“All I know is when we talk to our own colleagues, about 80% of our people would like to stay work from home. That’s the vibe we are getting so far. Does that mean that’s going to be what we settle on? Probably not. I will say, at the height of the pandemic, it was closer to 90-95%. There is a subsection of people who are now gradually interested in maybe coming back on premises.”

Achak said he could envision settling on a hybrid scenario in which employees work from the office for several days a week and work from home for the rest.

An unforeseen benefit of remote work, Achak said, was that flu season wasn’t nearly as disruptive in 2020 as it had been in the past.

Like many business leaders, Achak is waiting to see what the future holds for his company. When the pandemic does subside, he said he is excited to visit Salisbury.

“We’re excited to be a part of the community,” Achak said. “History has shown that we can do some pretty amazing things. That we’re very good about being good community members and we’re looking forward to being an exceptional part of the Salisbury community.”

Prospective employees can apply for jobs at careers.gofcr.com. The company’s website lists entry levels wages for its financial customer service representative position at $23,920 to $26,000 annually plus benefits for full-time employees.