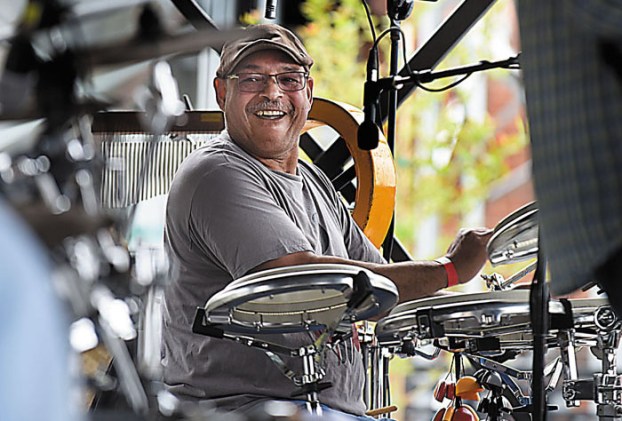 Percussionist, Carlton Jackson, enjoys the many sounds he can made during the Motel Soap concert at the New Sarum Brewery in 2019. Photo by Wayne Hinshaw, for the Magazine Salisbury

Through community involvement, art and music, Carlton Jackson has made a ‘rich impact’ on Salisbury

SALISBURY — Growing up in his mother’s kitchen on West Monroe Street, Carlton Jackson Jr. wanted to be a professional cook.

“My mother was a cook — a really good cook,” Jackson said. “She worked in the kitchen at the country club, in the kitchen in First Methodist Church downtown. I would help her and I was always interested in cooking.”

Jackson and his mother, a native of Puerto Rico, prepared Latin American dishes like the kind she ate as a child. To this day, Jackson still cooks many of those same dishes for his family. But replicating his mom’s signature recipes was, and still is, challenging for Jackson. She was the kind of cook who was more likely to rely on her intuition and taste buds than a measuring cup.

“She always operated on a ‘little bit of this, a pinch of that, add some more of that’ kind of approach to cooking,” Jackson said. “To try to boil that down to a recipe was difficult, but some of the things I really liked I made my own notes.”

Inspired by his mom, Jackson asked to be a cook when he enlisted in the Army after graduating from Salisbury High School in 1975.

His superiors had other ideas.

“I was told that I had skills that would be more suited for something other than being a cook,” Jackson said. “I ended up being an accounting specialist.”

By putting Jackson’s mind to use outside of the kitchen, his presiding officers nudged him down a different career path. He never became a chef, but he did serve several years in the military, earned an engineering degree and recently celebrated his 40th year at Duke Energy.

After starting at the energy company as an engineering aid, Jackson rose through the ranks and now serves as design manager for the company’s lighting design programs branch, covering a swath of west central North Carolina and the Palmetto-Peedee Territory in South Carolina. In his spare time, Jackson enjoys a variety of musical and artistic hobbies, but is also focused on improving the town he grew up in and still calls home.

“I love Salisbury. I always have,” Jackson said. “I’ve spent time in a number of places, primarily through military travel. I was in Virginia, South Carolina, Texas, out in California, but the old saying is ‘There’s no place like home.’ For me, that is true.”

Jackson had an opportunity to make Copperas Cove, Texas, his home after he was discharged from the Army. A business owner in the town, which is not far from where Jackson had been stationed in Fort Hood, extended him a job offer. Jackson turned it down, instead deciding to return to Salisbury to care for his ailing father.

Looking for work back in his hometown, Jackson found it in a familiar place — the kitchen. Bud Mickle, a family friend and the owner of a local tire shop, secured him a job at Bamby’s Bakery downtown.

Once again, Jackson was told by a supervisor — this one wearing chef’s clothes instead of a camouflage uniform — that his skills could be put to better use.

“I had a supervisor there who said, ‘You know, you seem to have an analytic mind. You should consider doing something in the engineering field,’” Jackson said.

Jackson took that advice and earned an associate’s degree in industrial management and engineering technology.

In search of a job in the engineering field, Jackson was again aided by Mickle, who he said he’ll be “forever grateful to.” Mickle lined up an interview for Jackson with Duke Energy, and Jackson was brought on as an engineering aid, responsible for meeting with customers to discuss installations. Jackson climbed the ranks, eventually earning the title of senior engineering technologist for the company.

In his career with Duke Energy, he’s designed electrical infrastructure for the VA hospital, Gildan and Food Lion warehouses. As part of the company’s power quality, reliability and integrity team, Jackson has worked to diagnose what went wrong during major power outages and how to fix them in the future. 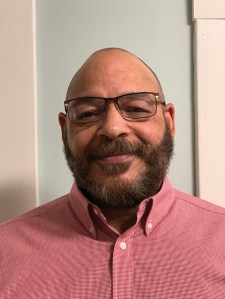 A man of many talents, Jackson is a painter and a musician when he’s not working for Duke Energy or helping out on a community board. Photo submitted.

As Jackson made a career for himself with Duke Energy, he started to become worried about the place where he was raising his family.

“In the late ’80s, early ’90s, our community was being ravaged by crack,” Jackson said. “I worried about the impact on my children. It was important to me to know they were OK and safe.”

Jackson became involved with Salisbury’s efforts to improve and revitalize the West End community where he’d grown up. He led a community cleanup and helped encourage teens and children through the West End Youth Action Committee.

Jackson’s work on the West End led to other community involvement opportunities across the city.

Jackson has served on the board for Waterworks Visual Arts Center and Rowan Helping Ministries, as a member of the Community Appearance Commission and helped with Rowan-Salisbury School’s School to Work Program. His proudest accomplishment, Jackson said, was receiving the Martin Luther King Humanitarian Award for Community Service in 1995.

“He’s had such a rich impact on our community over a period of time and he’s never looked for pats on the back,” Kluttz said. “He’s sincerely found a way to use his influence in important ways.”

Along the way, Jackson has also ingrained himself in Salisbury’s artistic community. At just 5 years old, he was taught how to play the drums by his uncle, who started with kitchen utensils.

“My uncle was a Latin percussionist and he came to live with us here and he put on records and I actually learned to play on my mom’s pots and pans because I didn’t have any drums,” Jackson said. “My uncle told me, ‘Now, when you get real proficient on those pots, we’ll look at getting you a set.’ For my eighth birthday, he got me a set of bongos.”

Jackson has been playing them ever since. As a member of The Brubakers band, he’s opened for the Charlotte Symphony multiple times. He’s also one of 13 members of the local musical group Motel Soap.

Along the way, Jackson added painting and drawing to his repertoire. His interest in art was peaked after watching a PBS painting special by Bill Alexander. He started with a basic acrylic paint set, but has since had some of his paintings showcased in galleries around the region. 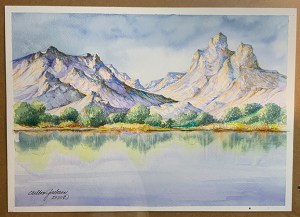 Jackson has never been afraid of pursuing his passions. It’s part of his “learn to swim” approach to life.

“You can walk around the swimming pool all day, you can stick a foot in the water, hang your legs in the water, but you will never swim until you jump in,” Jackson said. “That’s been my approach to everything I’ve tried to do. You’ve got to start somewhere, so the best place to start is wherever you’re at.”

With his eye on retirement in the coming years, Jackson said he’d like to eventually open a small art shop downtown.

Jackson lives in Salisbury with his wife, Shirley, who he said is his biggest supporter. They have five children, four of whom still live in Salisbury. 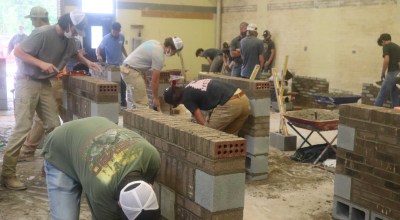