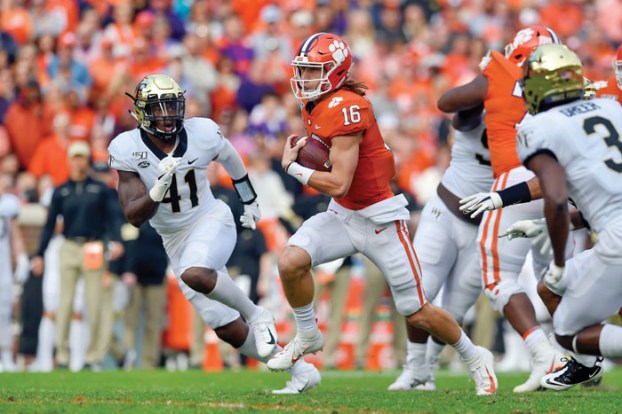 No suspense at the top of this NFL draft: Quarterback, quarterback and, yep, quarterback.
With fans in attendance, prospects on hand and Commissioner Roger Goodell dispensing greetings to players being selected Thursday night, Clemson’s Trevor Lawrence went to the Jacksonville Jaguars to get things started. Next was BYU’s Zach Wilson going to the New York Jets, and North Dakota State’s Trey Lance landing with the San Francisco 49ers.

That matched 1971 (Jim Plunkett, Archie Manning, Dan Pastorini) and 1999 (Tim Couch, Donovan McNabb, Akili Smith) as the only drafts with quarterbacks taken with the top three picks. Only Plunkett won a Super Bowl among those QBs, and he didn’t do it with New England, which drafted him.

Two more passers went in the top 15: Ohio State’s Justin Fields to Chicago, which traded up to the 11th slot with the Giants, and Alabama’s Mac Jones to New England.

Lawrence, a junior who led Clemson to a national title, generally is considered the best prospect at the position since Andrew Luck in 2012. He joins new coach Urban Meyer, himself a major success in the college ranks, in trying to turn around a franchise that went 1-15 last season.

“I’m just pumped,” Lawrence said. “The best is yet to come.

“I don’t what the point is … if you don’t expect to win every week. I’m going to bring the same mindset.”
The mindset in Cleveland was positive simply because there were 12 prospects (not Lawrence) and thousands of fans — including, according to the league, fully vaccinated folks near the stage — joining Goodell on the shore of Lake Erie. Last year’s draft, scheduled for Las Vegas, was instead a totally remote affair because of the COVID-19 pandemic.

Perhaps emboldened by successfully finishing the 2020 season on time and then staging the playoffs and Super Bowl without a hitch during the pandemic, the NFL targeted the draft as an opportunity to embrace some normalcy in America’s biggest sport. It also has used the event to support vaccinations for COVID-19 and, for the second consecutive spring, as a Draft-a-Thon raising money for a variety of causes.
Goodell received plenty of kudos for his hosting of last year’s draft in casual wear from his home. On Thursday night, dressed in a suit, he lauded the folks who sit in the seats.

“We all agree over the past season, one thing we missed the most was all our fans,” Goodell said. “And we can’t wait to have all of you back in First Energy Stadium and every stadium across the league this season.”

Wilson was expected to go to New York, which hasn’t had a franchise QB since Joe Namath.

“When a team isn’t doing super well and you can go in there and actually be a key piece to actually flip that organization around, I think that’s so special,” Wilson said. “I’m so excited, along with this new coaching staff, to go in there and try and do the best that we can to flip this thing around.”

Lance was something of a surprise at No. 3. He played only 17 games for his FCS school, but his offseason workouts sold San Francisco.

“It was awesome getting to know coach Shanahan a little bit,” Lance said. “He is an awesome dude and what he has done on the field speaks for itself.”

Florida tight end Kyle Pitts, considered by many the best athlete in this draft, went fourth to Atlanta, followed by wide receiver Ja’Marr Chase of LSU, who sat out last season, to Cincinnati. The first player from national champion Alabama off the board, on their way to tying a first-round record, was wideout Jaylen Waddle to Miami, where he will be reunited with quarterback Tua Tagovailoa.

“We’re going to do our best to try to make plays,” Waddle said, “and hopefully we can make it happen and try to be part of something special.”

The first offensive lineman was tackle Penei Sewell of Oregon, taken by Detroit.

The SEC and, naturally, the Crimson Tide, were particularly popular. Of the six SEC players chosen in the top 10, three were from Alabama: Waddle, cornerback Patrick Surtain II to Denver, and Heisman Trophy-winning receiver DaVonta Smith to Philadelphia, which traded up with division rival Dallas, of all teams. The others were Pitts, Chase and cornerback Jaycee Horn of South Carolina to the Panthers.

By the 17th slot, Alabama had five players chosen, with tackle Alex Leatherwood headed to Las Vegas. And when running back Najee Harris was selected by Pittsburgh, the Tide had, uh, tied the Miami Hurricanes’ mark of six first-rounders set in 2004.

After the Eagles-Cowboys deal, Chicago moved up from No. 20 and thrilled its fans by choosing Fields.

Dallas got some needed defensive help with Penn State linebacker Micah Parsons, and a third straight Big Ten player went 13th when the Chargers took Northwestern tackle Rashawn Slater. Offensive Rookie of the Year Justin Herbert has to be smiling at the added protection he will receive.

The Jets became the first club with a second selection when they traded up from No. 23 to Minnesota’s 14th spot for USC offensive lineman Alijah Vera-Tucker. He played tackle for the Trojans, but figures to switch to guard in the pros.

The first school other than ‘Bama with more than one player chosen was Florida when wideout Kadarius Toney wound up with the Giants 16 spots after Pitts went fourth. Virginia Tech joined that group with cornerback Caleb Farley at No. 22 to Tennessee and teammate Christian Darrisaw, a tackle taken by Minnesota. Both fit major needs.