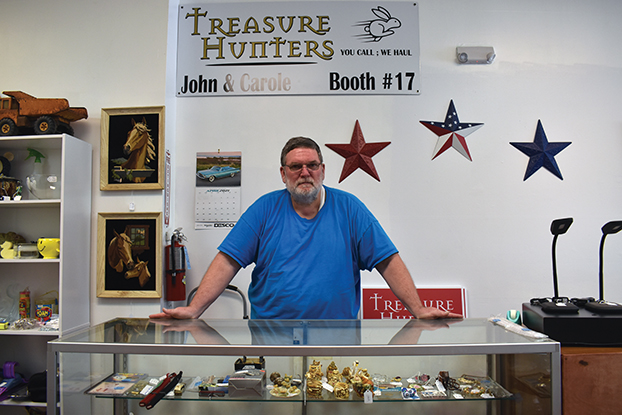 Opening Treasure Hunters variety store is the actualization of a lifelong dream for John and Carole Morrison. Ben Stansell/Salisbury Post

‘From A to Z, we’ve got it’: Couple of collectors opens dreamed-of variety store in Salisbury

SALISBURY — As a teenager growing up in Virginia, John Morrison spent his free time differently than most of his peers.

For hours, Morrison rummaged through “garbage heaps” in dogged pursuit of  old soda bottles and mason jars. The glassware, viewed by many as worthless, was as good as gold to him.

“I have been a peddler all my life,” Morrison said.

He was successful in his searches and eventually put together a small, but valuable collection of vintage containers. Morrison brought his collection with him when he moved from Virginia to North Carolina in search of opportunity at the age of 19.

The collection came in handy not long after, when Morrison, short on cash and still on the job search, sold it to an antique store in Concord for $500.

“I was ecstatic because I needed the money at that time,” Morrison said.

The store he sold it to, he said, was not unlike the shop he opened for the first time on Saturday at 807 B Jake Alexander Blvd. Opening the store, called Treasure Hunters, is the fulfillment of a lifelong dream for Morrison.

“I’ve always been hesitant because of the cost and whether I could make it or not, but I just decided that I’m going to try it,” Morrison said. “I’m not getting any younger. I hope we’ll do good here.”

The variety store, with “new, slightly used and used items,” has shelves filled with everything from porcelain plates to NFL-themed beanie babies. All of the inventory, Morrison said, is “priced to sell.”

Morrison has always been fascinated with collecting, but the hobby he picked up as a teen was put on the back burner when he started working professionally in retail. It wasn’t until he met his wife, Carole, over two decades ago that his love of searching for vintage items was reignited.

“She basically got me back into the hunting stage,” John said.

Together, the couple would go on scavenging trips to yard sales and auctions, each collecting items to resell and others for themselves. Their home is a “collective mess” of antiques, John said, but it looks more like a classy antique store than a scene from the A&E show “Hoarders.”

Carole said she has a special affinity for “cut glass” and “old, old things.”

Along with nearly 2,000 DVDs and Blu-Rays, John is especially proud of his collection of vintage Looney Tunes glasses and his set of The Old Curiosity Shop dishes. Those are items he bought to keep, that won’t be found on the shelves of his new store.

“I try to hang onto the stuff I like,” John said.

When John retired from retail about a decade ago, he purchased a large, white trailer emblazoned with the Treasure Hunters logo, filled it with goods he found himself and started hauling it to flea markets early in the morning. But as he grew older, the time consuming and physically demanding nature of operating a flea market booth eventually wore on him.

“It’s too hard for me to get up that early in the morning. For flea markets, you’ve got to get up and get out there at 3 or 4 o’clock in the morning,” John said. “You’re done by lunchtime, but it got to be too hard on me getting in and out of that trailer, setting tents up.”

The couple switched strategies, selling their items on consignment in other shops, all the while looking for their own space in Rowan County. Finding the perfect spot for a store proved difficult.

“Carole and I have looked Rowan County over for probably 20 years to find this little store,” John said. “They’re either too big or made into offices with cubby holes, or they have no parking. There’s a whole host of reasons, but we’re lucky Jason Wallace with Wallace Realty let us have this spot.” 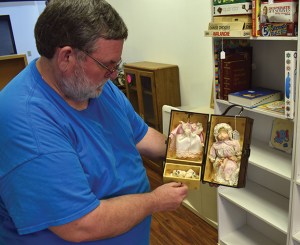 After being the ones renting space in other stores for consignment, Carole said it’s exciting to rent out space to others.

“It’s creating more awareness of what’s going on and what’s available out in the world,” Carole said. “I’m amazed at what people collect. Even when people think something doesn’t have any value, there’s always someone out there that collects it.”

The 1,000 square foot space isn’t big, but it gives the Morrisons ample room to fill shelves and space with any number of items. Shoppers will discover everything from a milk container used in the 1800s to an eggplant-shaped pitcher. A decades old, unopened box of crayons sit on a shelf next to leather shoes that look like they belong in “Saturday Night Fever.”

John is offering nine spaces in the store for consignment, four of which have already been rented. There will be a “steady flow” of new inventory in the shop procured by John and Carole from auctions, yard sales and abandoned storage units.

“We’ve got stuff for children, teenagers, men and women,” John said. “I mean, we’ve got something for everybody. From A to Z, we’ve got it.”