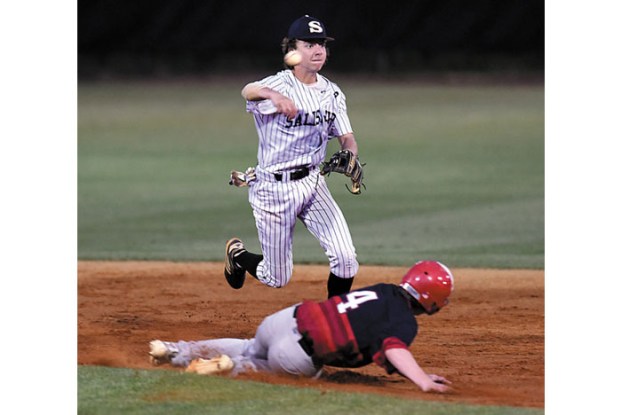 South Rowan’s Kane Kepley is forced out at second as Salisbury’s Vance Honeycutt throws to first after the put out during a game in 2019. photo by Wayne Hinshaw, for the Salisbury Post

Fifth in a series of reports on local teams …

SALISBURY — In a year of COVID and a powerful football playoff run that won’t conclude until Thursday night’s 2AA state championship game, Salisbury has managed to piece together a 15-man baseball roster.

Yang is expected to be the starting second baseman for the Hornets and she could also see some action in the outfield. She had a line-drive hit on opening night when the Hornets outscored Anson.

Salisbury’s baseball coaches are also football coaches, which has made life challenging in April.

“It’s the first time I’ve ever felt old as a coach,” said baseball head man Mike Herndon, who doubles as the football defensive coordinator. “Teach all day. Practice football from 4 to 6:30 and then practice baseball from 7 to 9:30. We’ve got some players doing both sports and running around. I don’t know how they do it.”

Any baseball team with Vance Honeycutt on the roster has a chance to win games, even in a Central Carolina Conference that figures to be top-heavy with strong North Davidson, Ledford, Oak Grove and South Rowan squads.

Honeycutt, who quarterbacks the football team, plays shortstop for the baseball Hornets. A UNC signee, he’s always been exceptional on defense, running the bases and on the mound, but now he’s probably going to have his first huge offensive season. Physically, he’s a whole lot different now than he looked in 2019 and he’ll bring power to the plate. He went 3-for-3 with a triple in Salisbury’s wild win against Anson.

“Vance can do it all on a baseball field and will be one of the top players in the county,” Herndon said. “We don’t plan to pitch him a lot because he’ll be playing in the field in college, but if we’ve got a lead after five innings, you might see him come in to close it.”

The other familiar faces belong to Max Crawford, an outfielder who will also do some catching, and Jackson Murphy, who can play just about anywhere. Murphy’s best position probably is third base. He’s the most likely candidate to play shortstop when Honeycutt is on the mound. Murphy is a good athlete, a starting football receiver and the long snapper.

“He’s a lot faster and stronger than he was a year ago,” Herndon said.

The Hornets got a huge boost from North Rowan transfers Kaleb Burleyson and Chase Shoaf.

The biggest question for the program entering this season was catching, and Burleyson is a capable backstop.

Crawford can catch when Burleyson pitches. Burleyson and Shoaf are expected to be the No. 1 and No. 2 hurlers.

“We don’t have the numbers we’ve had and we won’t have a jayvee team this season,” Herndon said. “But we’ve still got a chance to be very competitive.”

Reed Fugle, another strong football player, is making a baseball comeback. He didn’t play baseball last season. He has opted for baseball over wrestling, with those two sports operating simultaneously in the modified COVID schedule. Fugle will play right field or first base.

Wade Robins has been another revelation. Robins, who will probably start in left field, has been playing a lot of sports lately — soccer, golf, football, and now baseball.

“The first practice I didn’t know if he’d be any good,” Herndon said. “But he’s improved a ton already. Now if the ball’s hit to him, we expect it to be an out.”

Will Webb, a quick goal-scorer for the soccer team, came out for baseball and is such a good athlete he’ll be a starter at third base or in the outfield.

Golfers Luke Graeber and Will Fowler came out and will be helpful.

“Fowler has always focused on golf in the spring, but he played a lot of AAU baseball growing up,” Herndon said. “He can be good.”

Also on the roster are Aaron Yang, Steven Lescoe, Jack Everson and Soroya Miller. Herndon will find ways to use everyone.

‘We usually do a lot of winter work, and we didn’t get to do that this year,” Herndon said. “So we’re quite a bit behind where we’d normally be. We’ll have to take it easy on the arms and really watch the pitch counts.”

While most of the deep Rowan squads would love to be playing three-game weeks instead of two-game weeks, playing twice a week should be perfect for the Hornets, who don’t have a surplus of arms.

“We’re excited about playing,” Herndon said. “Hopefully, we can beat some of those good teams. It’s always fun to make the good teams a little bit mad.”

Salisbury baseball at a glance