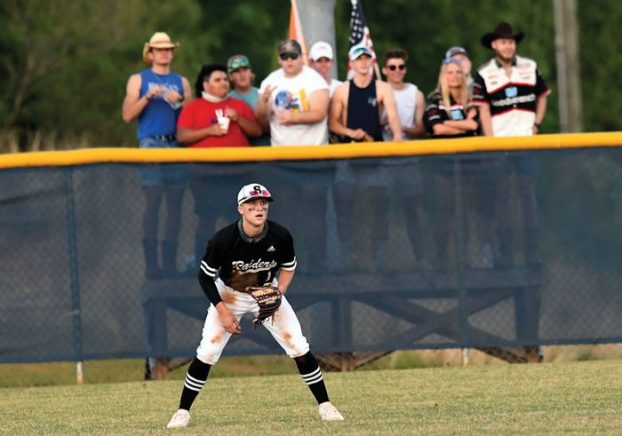 South's right fielder Jackson Deal 1 with Carson fans behind the fense. photo by Wayne Hinshaw, for the Salisbury Post

CHINA GROVE — South Rowan senior Jackson Deal went 4-for-4 and scored three runs in Friday’s 11-2 win at Carson, the biggest baseball game of his career to this point.

But there could be even bigger ones ahead.

Deal, who is headed to Methodist University as a baseball recruit, is still better known for a different sport. He’s a grandson of the late Larry Deal, who was head coach of South football from 1983-1994.

Deal was South’s leading rusher for the 2021 football season with 402 rushing yards and four touchdowns and led the team with three TD catches. He also was the punter.

But while his past has been mostly football, his future will be baseball.

“When it comes to baseball, he qualifies as a late-bloomer,” said South head baseball coach Thad Chrismon, who also is Deal’s uncle. “Football has always been such a big part of his life, so he’s never really played a lot of extra baseball. When he starts concentrating on baseball 365 days a year, he’s a good enough athlete to improve rapidly. He could really take a jump.”

Physically, Deal already has taken a massive leap in the last year and a half. In the 2019 football season, he was listed at 5-foot-9, 143 pounds.

Now he’s 6-1, 185, and he’s gotten considerably faster, while he’s gotten larger. He’s been the quickest runner at some baseball camps and he has a good arm. He’s been clocked at 81 mph, which means he has plenty of arm to play right field or third base —his two primary positions — and he’ll also get some chances to pitch for the Raiders.

Deal has his head on straight and his priorities in order. He makes good grades and has known for a while he was going to college. What he didn’t know was if he’d be able to continue to play a sport at the next level.

That picture cleared up recently.

“I emailed college coaches to see what kind of interest there was and Coach (Spencer) Martin, the top assistant at Methodist, responded and said they would be interested in me for baseball,” Deal said. “He asked me to set up a visit.”

Methodist, located in Fayetteville, is an unusually successful Division III program. Head coach Tom Austin was hired there in 1980 and leads all active D-III coaches in victories with 1,199.

“When I visited, I found out what a great baseball program they have in place there,” Deal said. “I was impressed. Great facilities, great school.”

But the success of Methodist baseball wouldn’t have mattered to Deal if the school hadn’t also provided the right academic fit.

He wants to major in biology and was excited to hear about Methodist’s highly regarded biology department, which includes seven biologists and eight teaching labs. Biology is one of Methodist’s leading majors.

A biology degree would be a good base for his career goals.

“I want to become a physician’s assistant or physical therapist,” Deal said.

Deal, who also played basketball for South as a senior, believes Methodist will prove the ideal blend of academics and athletic opportunity.

But first he wants to have a big senior baseball season.

He showed a balanced, quick swing on Friday and hit several liners back up the middle. And once he gets on base, he put pressure on defenders. He scored easily from second base on a single to center and beat out a roller toward the second baseman. He laid down a bunt that trickled foul, but that’s also part of his arsenal.

“That bunt went foul, but then he hit a line drive — he had some great at-bats,” Chrismon said. “He’s a natural player, a very mature player, an intelligent player. He’s going where he should get a chance. I won’t be surprised if he becomes a special player.”