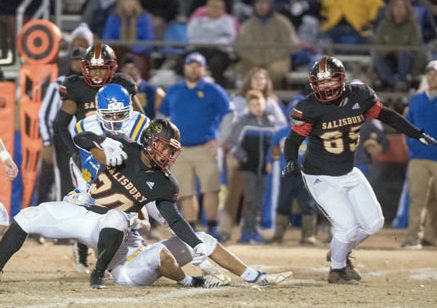 JON C. LAKEY/SALISBURY POST FILE PHOTO Sam Evans (65) has been a key part of the Salisbury offensive line this season, opening lanes for backs like JyMikaah Wells to run through.

SALISBURY — It was wet enough on Monday that the Salisbury football team was forced inside, but the Hornets cheerfully ran sprints and drills in the First Baptist Church’s Family Ministry Center, the old YMCA gym.

There was a lot to be cheerful about.

There was Friday’s 24-21 regional final win against North Davidson as well as tonight’s clash with unbeaten St. Pauls in Raleigh, a 7 p.m. matchup that will decide the 2AA state championship.

No one felt better than the offensive linemen about making it back to another state-championship scrap.

That 0-line group, which includes tackles Tkaii Gaither and Jacquez Peele, guards Sam Evans and Jacoby Heggins, and center Bryan Rosado, opened holes for 354 rushing yards on Friday against a stingy defense. The Hornets (8-2) produced three 100-yard rushers in the same game for the first time this season,  with JyMikaah Wells surpassing the 100 plateau for the ninth time, freshman Mike Geter for the second time, and QB Vance Honeycutt for the fourth time.

“We know we’ve got some good guys running the ball,” Salisbury head coach Brian Hinson said. “But those guys up front also had a lot to do with all those rushing yards.”

Salisbury has amassed at least 300 rushing yards in four of its last five games, with only Burns (a 10-7 win) being able to slow down the Hornets’ ground game.

Hinson was hired as Salisbury’s head coach in 2017. Prior to that he was the offensive line coach at Catawba. One of Hinson’s all-conference Catawba linemen, Taylor Fender, was a sharp student-athlete who double-majored in accounting and information systems at Catawba. Fender is now part of the local business world, but his part-time passion is coaching Salisbury’s offensive line. He was Hinson’s first hire. He hasn’t regretted it.

The offensive line, which graduated key people, was viewed as a potential weak link for the Hornets for the 2021 season.

“We did have a tough few weeks,” Fender said. “We moved guys around. You’re always trying to find the best combination.”

There was some initial success for the rebuilt o-line against West Rowan on an adrenaline-filled opening night (270 rushing yards), but the Hornets didn’t experience overwhelming ground success the next three weeks. Back in March, they totaled a modest 141 rushing yards in the ugly loss to Oak Grove and 131 in the loss to North Davidson. 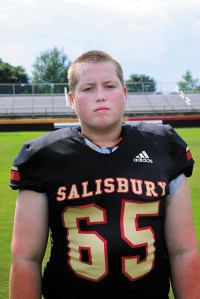 “There were a lot of o-line mixups in the two losses,” said Evans, one of the veterans who played in the 2019 state championship game against Shelby. “But it wasn’t anything we couldn’t overcome. The best way to overcome the mistakes was to keep working.”

The Hornets searched for the right five, making personnel tweaks as well as position switches.

“Jacoby Heggins missed some time early with COVID and it helped when we got him back,” Evans said. “It helped when Bryan Rosado moved from guard to center. But I think the biggest thing in our improvement has been the voice of (senior right tackle) Tkaii Gaither. That’s the voice I always hear out there, always encouraging us, always talking, always reminding us to get off the ball.”

Evans was home-schooled, so he had a lot of adjustments to make to high school football.

“The CCC is a little different than the league Sam had been playing in,” Hinson said with a chuckle. “But he’s come a long way. He’s gotten better. He’s very solid. He’s from a football family. (Former North Rowan and Catawba quarterback) Bobby Myers is his uncle.”

Honeycutt gets sacked occasionally, but he still has 779 net rushing yards on 124 carries, also 6.3 yards per carry.

Geter has become a bigger ball-carrying factor in the playoffs. He had 107 rushing yards on 14 carries on Friday. He has electrifying speed and could be a big part of the state-championship game plan.

Wells and Honeycutt have 15 rushing TDs each, a stat that indicates how much the offensive line came together as the season unfolded.

“We grew as a unit, as a brotherhood,” Evans said.

It’s unlikely the Hornets will put up huge numbers tonight, but they believe they can do enough.

“We’ve got guys running the ball who can make our offensive line look good,” Fender said. “Hopefully, there also will be times when our o-line makes our backs look good.”