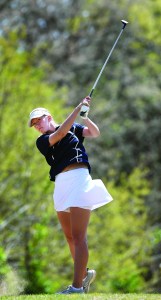 She birdied the third hole and made five pars, with four coming on the back nine.

Waddell was county and conference champion.