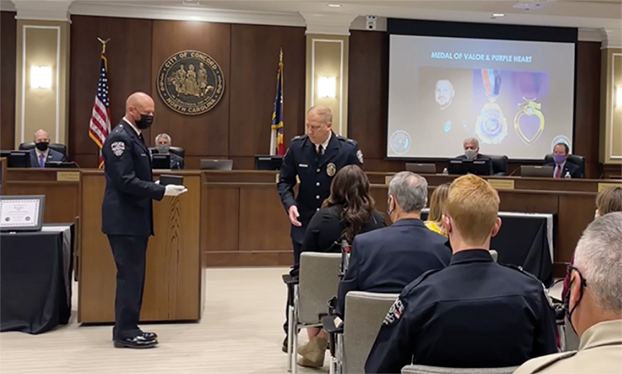 CONCORD — Jason Shuping, a Rowan County native and Concord Police officer who was killed in action in December, posthumously received a Medal of Valor and Purple Heart from his department on Thursday.

Concord Police Chief Gary Gacek presented the awards to Shuping’s widow, Haylee, during a ceremony at Concord City Hall. Gacek also presented officer Kaleb Robinson, who grew up in Rowan County and was injured in the same incident, with the Medal of Valor and Purple Heart awards.

Shuping and Robinson responded together on Dec. 16 to a Sonic restaurant off of Bruton Smith Boulevard after a car crashed into a guardrail at the interchange with Interstate 85. A woman at the restaurant told officers a person attempted to steal her vehicle after the crash. Shuping and Robinson approached a man matching the woman’s description and were fired at. That’s when Shuping was killed and Robinson was injured.

During Thursday’s ceremony, Gacek said Robinson is alive because of Shuping’s actions.

“Two law enforcement officers were targeted with gunfire from a person with no regard for human life,” Gacek said Thursday. “Jason stepped in and, in doing so, took the suspect’s attention and aim away from Kaleb and brought that upon himself and obviously paid the ultimate sacrifice in doing so.”

Speaking directly to Shuping’s widow, an emotional Gacek said, “If I could move heaven and earth to bring Jason back, I would. I would like nothing more than to pin these medals on his chest as he stands before me today.” Shuping’s legacy will forever be cemented as an American hero, he said.

After Robinson was shot and wounded, he remained at Shuping’s side, protecting him and shielding him during an exchange of gunfire. Robinson also returned fire at the man who killed Shuping.

Describing’s Robinson’s composure, Gacek said the officer would have climbed right back into his patrol vehicle and accepted assignments as soon as he was released from the hospital.

“I say that because of how stoic, how unflappable he remained in the moments, the days, the weeks, the months following Dec. 16,” Gacek said.

He said Robinson, Shuping and Concord officers Kyle Baker and Paul Stackenwalt have been nominated for the Congressional Badge of Bravery. Baker and Stackenwalt responded immediately after Shuping and Robinson were shot to return fire at the suspect, who was killed.

Gacek said federal officials are conducting background investigations on the officers and that he’s hopeful all four will receive the award.