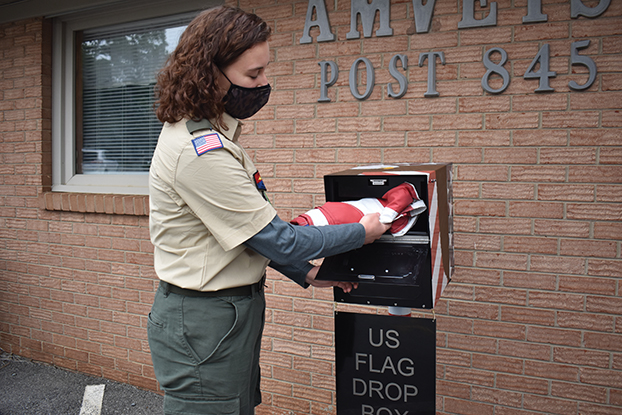 Salem Fleming, soon to be an eagle scout, places the first retired flag in the drop box that she welded together and painted. Ben Stansell/Salisbury Post

ROCKWELL — With smoke wafting through the air around them, three Scouts from Troop 4328 raised a new American flag over Amvets Post 845 in Rockwell on Wednesday night.

The source of the smoke enveloping the area was the flag that had just been brought down and retired. It was smoldering in a small fire pit not far away.

Leading the ceremony from behind a podium was 17-year-old Salem Fleming. Next to her stood the reason for the occasion — a flag retirement box covered with a soaring eagle and red, white and blue stripes that she’d spent weeks constructing and painting.

Building the flag retirement box earned Salem the last rank requirement needed to become an Eagle Scout. She finished just in time, about a month shy of her 18th birthday and the age cutoff. 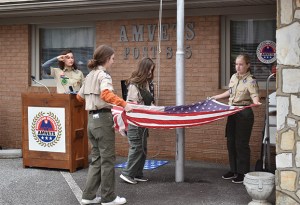 By becoming an Eagle Scout, Salem was not only achieving a personal goal — she was helping make history as the second female in Rowan County to earn the prestigious rank. Cyrus Jones earned the rank of Eagle Scout earlier this year, becoming the first in the county.

Prior to January 2019, Boy Scouts of America, now called Scouts BSA, was only open to boys. Now, the organization is co-ed, with genders still separated into troops.

Without the option of joining Scouts BSA in elementary school, Salem she became a Girl Scout. At age 14, she joined a venturing crew, which is open to both boys and girls. Two years later, when Scouts BSA changed its organization structure and finally permitted girls to enter its ranks, Salem jumped at the chance.

By joining the organization later than most, Salem had a lot of ground to make up and not a lot of time to do it. To advance from the lowest rank all the way up to Eagle Scout, she had to quickly start earning badges.

“Something that usually takes about six years has taken me two years,” Salem said. “It’s been a very rapid process. I rushed a lot, but I got to experience so many cool and interesting things.”

Marny Hendrick, a member of the Sapona District Eagle Review Board, said he is impressed with how Salem moved up the ranks.

“Salem is one of those highly motivated individuals who tackled the scouting program in an impressive way,” Hendrick said. “Not only did she complete the requirements, but she took on leadership responsibilities.”

While most teenagers relish sleeping in or hanging out with friends on the weekends, Salem spent many of hers completing badge assignments or work projects. The sacrifice, she said, has been worth it.

“I just wanted to be a part of the Eagle Scout community because they’re such amazing people and they have respect for the people around them and the people who are different from them,” Salem said.

Having achieved the rank of Eagle Scout as a female, something that is still rare, Salem is setting an example for the other girls in Troop 4328, which is overseen by her mother, Scarlett Fleming, at Ebenezer Lutheran Church.

“I’ve always said that girls can pretty much do anything and it just serves to prove that they really can,” Salem said. “It’s opening a door for more girls to be involved. The girls in my troop who helped me out with my Eagle ceremony see me as a role model and can see it’s possible and work toward becoming Eagle Scouts as well.” 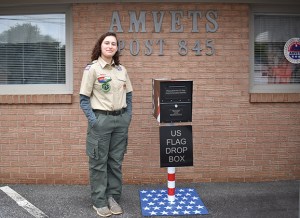 Salem Fleming stands next to the retired flag drop box she made and donated to the Amvets post in Rockwell. Ben Stansell/Salisbury Post

To construct the flag retirement box, Salem took a standard mailbox, added several components and mounted it to a platform. Throughout the process, Salem learned how to weld from her father Ric, who is an experienced mechanic.

“She had not welded before, so that was new,” Scarlett said. “She and her dad probably spent seven or eight hours on it.”

An aspiring artist, Salem sketched out the design for the flag retirement box herself and brought it to life using acrylic and spray paint. Upon graduating from Carson High School, Salem will attend Catawba College where she plans on studying art and environmental science.

The flag retirement box, which will be outside Amvets Post 485, was much needed.

Nancy Shiverdecker, the post’s outgoing commander, said the members are excited to have the box. With people now having a place to donate old flags, Shiverdecker said the post may once again host large flag retirement ceremonies like it once did.

Mark Beaver, the incoming commander, said the post is open to helping more Scouts like Salem complete projects to earn their Eagle.

Salem is one of several local Scouts working to become Eagle Scouts after completing or in the process of completing projects in the community.

Layton Barber, an Eagle Scout candidate and member of Boy Scout Troop 324 at Rock Grove Methodist Church, raised thousands of dollars to order bronze braille flags that he will soon dedicate and install at several Veterans Homes across the state. 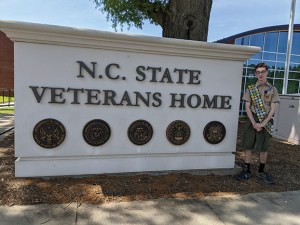 Patrick Rattz, now in the Marine Corps, completed a landscaping project at the Harold B. Jarrett American Legion Auxiliary Unit 342 in Salisbury. The flag pole outside of the building is now surrounded by decorative brick, mulch and lights. 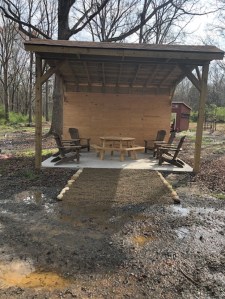 Ryan Brady, an Eagle Scout candidate from Troop 443 at St. John’s Lutheran Church, has been working to complete a shelter area at Happy’s Farm that will serve as both a place for people to relax and learn about history. Brady, 15, put information about the branches of military on the shelter and installed a fire pit nearby. The rising junior at East Rowan will likely earn his Eagle Scout award in the coming months.