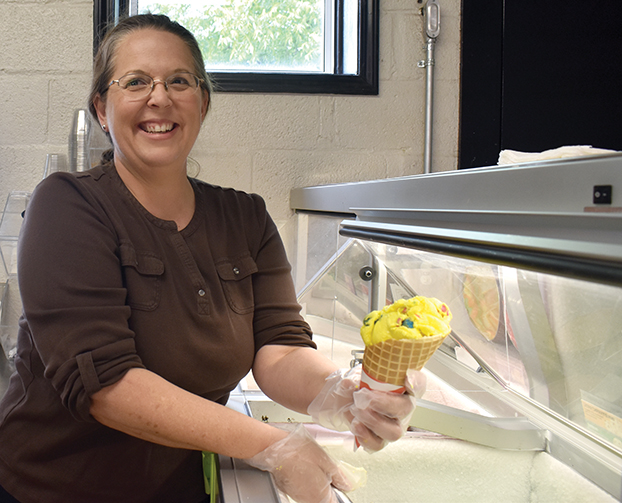 Elsie Bennett's newest venture is an ice cream parlor and general store that she opened in downtown Cleveland in an effort to help revitalize the downtown. Ben Stansell/Salisbury Post

CLEVELAND — Elsie Bennett is a firm believer in ice cream’s power to bring people together.

That’s why, when she was approached a few months ago with the idea of opening a shop in downtown Cleveland, Bennett decided to center the store around the frozen treat.

In the few weeks that followed, Bennett and a dedicated group of helpers transformed the formerly vacant storefront at 103 W. Main St. into what is now Elsie’s Ice Cream Parlor and General Store.

The store held its grand opening on May 22 in conjunction with the unveiling of Cleveland’s new barn quilt mural. The mural, located on the side of the building next to Bennett’s shop, is 24 feet long and 8 feet. Bennett painted it herself when she wasn’t scrambling to prepare to open her store.

“With the excitement, we opened this store and created this massive barn quilt logo for the town all within two months,” Bennett said. “There was not a lot of sleeping, but we got it done and we’re grateful.”

The opening of Elsie’s Ice Cream Parlor and General Store is part of a larger effort by Cleveland leaders to revitalize the downtown area. Before Bennett’s new shop opened, the only storefront in the strip of buildings that was occupied was the U.S. Post Office.

The strip of five storefronts was built by Christine Brown Allman’s grandfather decades ago. Allman, Bennett said, was integral in encouraging her to open Elsie’s Ice Cream Parlor and General Store, which is located where a pharmacy and soda shop once operated.

This isn’t Bennett’s first effort to revitalize a historic building in a rural part of Rowan County.

Almost a decade ago, Bennett and her husband bought a 100-year old building in Mount Ulla that was once Steele Feed & Seed and turned it into what is now West Rowan Farm Home and Garden. The store, which carries home and garden products in addition to artwork, furniture and clothing made by local vendors, earned its claim to fame by having one of the largest community barn quilt murals in the area. 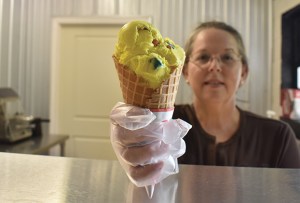 Elsie Bennett holds out a cone of playdough ice cream, one of the many Hershey’s Ice Cream flavors offered at her shop. Ben Stansell/Salisbury Post

By giving the former feed and seed building a second life, Bennett turned the store into a community hub.

Now she’s hoping to do the same for downtown Cleveland.

“I feel like this is my part of trying to keep the community together,” Bennett said. “Sometimes we’ll have several generations of family members sitting here together sharing stories.”

Elsie’s Ice Cream Parlor and General Store has far more than a variety of Hershey’s Ice Cream flavors, which include staples like Rocky Road but also new, more eccentric offerings such as Playdough (a bright yellow vanilla ice cream with sugar cookie bits). Like West Rowan Home and Garden, the shop also features a bevy of items made by locals. There are hats with handmade designs, colorful paintings of farm animals and even a marble-topped table that utilizes repurposed meat grinders as wine holders.

“Everything is pretty much from North Carolina or made locally,” Bennett said.

Pretty much the only thing that isn’t sourced locally is fresh fudge made Tennessee family who Bennett has had a connection with for years.

While Bennett’s Mount Ulla store and Cleveland shop may seem similar, they aren’t exactly carbon copies of one another.

“I thought it would be a wonderful opportunity to cross market what we’re doing in Mount Ulla along with Cleveland so that they can complement one another without imitating one another,” Bennett said. “It’s important they work cohesively together, that I bring in more artisans and different artisans than we’ve had in the past.”

Although the parlor held its grand opening several weeks ago, Bennett is still working to get the store exactly how she wants it to be. 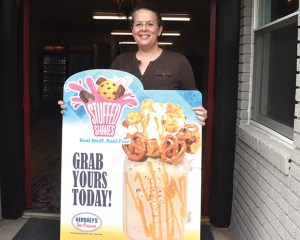 The shop will soon offer coffee, frozen entrees made by L.A. Murph’s in Salisbury, hot dogs and even stuffed milkshakes — the oversized, over-the-top and extremely instagramable shakes served with cheesecake, brownies or other desserts piled onto a traditional shake. Those will be sold starting on Thursday.

In front of the shop, Bennett has installed tables and chairs. Behind the store is a small green garden area where people can enjoy their ice cream while sitting next to ripening tomatoes. This summer, Bennett is planning to host community events near the garden, including Bluegrass musicians and a craft show.

In addition to running Elsie’s Ice Cream Parlor and General Store and West Rowan Farm Home & Garden, Bennett is working to coordinate a mammoth barn quilt mural that will be painted on the Cleveland Fire Department.

Similar to the community mural painted on Bennett’s store in Mount Ulla, the Cleveland Fire Department mural will be a community effort. Anyone interested in participating can visit one of Bennett’s shops to talk to her about contributing. Bennett is also working with Cleveland to establish a barn quilt walking train through the town.

Elsie’s Ice Cream Parlor and General Store is currently open Thursday through Saturday from 10 a.m.-8 p.m. and Sunday 2-8 p.m. More information about the shop can be found at its Facebook page. More information on upcoming events being hosted by the Town of Cleveland can be found on its website at  https://clevelandnc.org/. A new town of Cleveland events website will soon be launched.