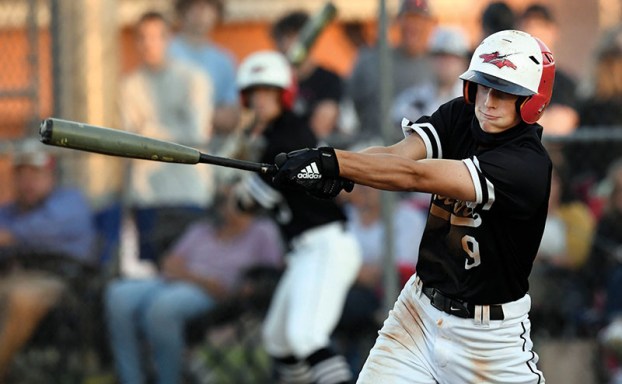 South’s Ty Hubbard swings during a game against Carson earlier this season. South takes on West Stanly in tonight’s first round of the 2A state playoffs. photo by Wayne Hinshaw, for the Salisbury Post

South Rowan sophomore lefty Haiden Leffew looked outstanding when he won at Carson during the first week of the season, but his arm didn’t recover right away.

Tenderness lingered for several weeks. Leffew didn’t return to the mound until the Raiders went to North Davidson on May 21.

“He was all over the place in that one,” South head coach Thad Crismon said. South lost 6-1.

But Leffew has gotten better command with each outing. He struck out nine in the crucial win at Ledford that was the turning point in South’s season. Then he struck out out 10 in five innings in the Central Carolina Conference Tournament semifinal at Oak Grove.

Leffew (3-1) is the probable pitcher for South in Tuesday’s first round of the 2A state playoffs. He has the best stuff on the staff, but South has been able to put together a deep pitching corps around him, especially since senior Luke Hiskey (2-0) returned to the mound. Hiskey won the conference championship game with five strong innings against North Davidson.

Offensively, South is pretty good throughout the lineup, but especially at the top where it starts off with center fielder Kane Kepley, shortstop Nathan Chrismon and second baseman Ty Hubbard.

South finished third in the CCC regular season, so the Raiders are seeded 15th in a 16-team bracket. Their first-round opponent is second-seeded West Stanly (14-1). The Colts went undefeated in the Rocky River Conference regular season and also won the conference tournament. West Stanly hasn’t lost since April 30.

Leaders for the Colts include Connor Tucker, a lefty slugger headed to Belmont Abbey and the Rocky River Conference Player of the Year.

Michael Crayton, a 6-foot-4 right-hander, was the Rocky River Conference Pitcher of the Year. He’s a mid-80s hurler.

It’s quite a first-round matchup. West Stanly is ranked third in 2A by MaxPreps, while South is ranked eighth.

Carson got a wildcard spot in the 3A West bracket, as expected. The 15th-seeded Cougars (9-4) will head to Hickory to play second-seeded St. Stephens (9-3) on Tuesday.

St. Stephens finished second in the 3A/4A Northwestern Conference, but was the top 3A team in the league.

Jimmy Bowman is the first-year coach of St. Stephens.

Junior right-hander Julien Peissel has five wins and an 0.24 ERA for St. Stephens. Gavin Marley has three wins and a 2.62 ERA. Lefty Josh Barkley has pitched in eight games and has a 1.65 ERA.

Coached by Chis Cauble, Carson is expected to send sophomore Hayden Simmerson (3-2, 2.65 ERA) to the mound. Dylan Driver (2-1) and Mason Duren (3-1) have been the other main pitchers for the Cougars.

Senior center fielder CP Pyle leads the Cougars in runs scored, with 14. Senior third baseman Caden Hudson leads in RBIs, with 16. Driver, the right fielder when he’s not pitching, leads the team with a .405 batting average.

East Rowan, seeded third in the 3A West bracket, will be the only Rowan team playing at home on Tuesday. First pitch is at 7 p.m.

Western Guilford (8-7) provides the opposition. Western Guilford had a 7-3 record in the Piedmont Triad 3A, and along with Mount Tabor, won a draw with West Rowan for a wildcard berth in the playoffs.

East is ranked 13th in 3A, while Western Guilford is ranked 47th.

East coach Brett Hatley has been able to rely on a strong trio of pitchers. Cameron Padgett (4-0, 0.27 ERA) has been great. Chance Mako (4-0, 1.45 ERA) is also unbeaten. Jake Hunter (3-2, 2.57 ERA) had his best start of the season when he shut out West Rowan in the NPC Tournament championship game.

East has only two homers, but it has 21 doubles and a good lineup. Freshman leadoff man Cobb Hightower (.370) gets things started. Left fielder Aiden Schenck (18 RBIs) and DH Morgan Padgett (16 RBIs) have driven in the most runs.