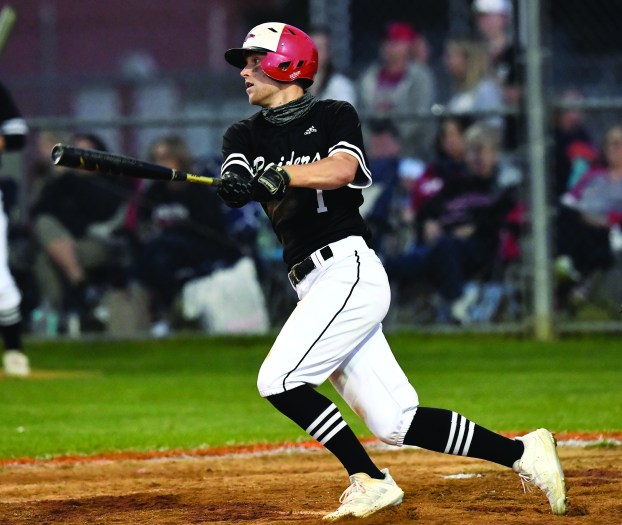 South will count on Jackson Deal to stay hot against Oak Grove, and he’s also available to pitch if needed. File photo by Wayne Hinshaw, for the Salisbury Post

SALISBURY — The randomly seeded NCHSAA baseball playoffs were expected to create more upset possibilities than usual, and in Tuesday’s first round, seeding proved to mean absolutely nothing.

No bracket was busted as thoroughly as the 2A West bracket that includes South Rowan.

South Rowan (13-3) has won eight in a row and had a chance to be the last team standing in the 2A West even before the bracket collapsed.

Now the Raiders take on a familiar opponent — Central Carolina Conference rival Oak Grove. South will travel to Midway, about 12 miles south of Winston-Salem, to take on the 10th-seeded Grizzlies.

South has reasons to be confident. The Raiders clobbered the Grizzlies 10-0 in the semifinals of last week’s CCC tournament, a dramatic reversal of a 9-6 South home loss to Oak Grove during the regular season. Oak Grove got up 6-0 early in that first meeting and was able to hang on. South lefty Haiden Leffew dominated the rematch, and the Raiders prevailed convincingly via the 10-run rule.

South employed Leffew to beat West Stanly on Tuesday, so Luke Hiskey (2-0) is the probable pitcher for the Raiders tonight. Jackson Deal (2-0) also is available, and Chandler Oddie, who threw 38 pitches in relief on Tuesday, will be eligible to pitch again.

All nine South hits on Tuesday came from the top four in the lineup. The Raiders will count on veterans Kane Kepley, Nathan Chrismon, Ty Hubbard and Deal to stay hot.

Oak Grove (11-3) is coached by former Catawba star David Thomas, who is now a member of the Indians’ Sports Hall of Fame.

Thomas was named as Oak Grove’s first head coach. Oak Grove began competing in baseball in the spring of 2018, but quickly made an impact in the CCC. That wasn’t a shock. The new school drew its students from the Ledford/North Davidson area. Those two schools are traditional powers.

Trenton Doss, a junior, had a homer and a triple and carried Oak Grove’s offense in Tuesday’s 3-2 win at Madison. The Grizzlies won that one after a road trip of about three hours. Brady Turner did most of the pitching for Oak Grove in Round 1, so sophomore Ethan Yarbrough and junior Brennan Hord probably will be counted on to pitch tonight. South has had success against both of them. Freshman Dawson Shelton relieved in the first round. 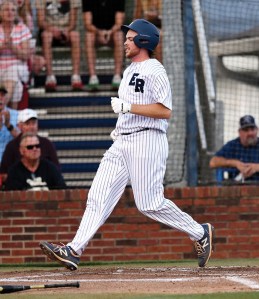 East’s Jake Hunter hit a homer to win the game Tuesday night. photo by Wayne Hinshaw, for the Salisbury Post

Third-seeded East Rowan was expected to have a relatively easy first-round game against wild card Western Guilford, but things didn’t go according to the script.

The Mustangs needed eight innings and a walk-off homer by Jake Hunter to win 5-4 and extend their season.

East jumped out early 4-0 and was cruising behind unbeaten starting pitcher Cameron Padgett, but four errors helped Western Guilford get back in the game.

The Mustangs will be playing a good team in the second round tonight in 11th-seeded Sun Valley (12-3). First pitch at Staton Field is at 7 p.m.

Sun Valley is a Union County school and plays in an excellent baseball league — the Southern Carolina.

Sun Valley, Cuthbertson and wild card Marvin Ridge all won in the first round of the playoffs.

Sun Valley has been scoring about eight runs per game, while allowing three.

East will count on Hunter (3-2) on the mound tonight. The East Carolina signee hasn’t had the season he expected to have, but the senior pitched his best game of the season in his last outing, a shutout of West Rowan in the North Piedmont Conference Tournament championship game.

Then Hunter came up big with his bat (triple, homer, 3 runs scored) on Tuesday. He also made two outstanding defensive plays at first base.

East has a good lineup, with freshman shortstop Cobb Hightower (.380) leading off  and Aiden Schenck, Griffin Warden and Morgan Padgett providing some power in the middle.

Austin Fulk had two hits on Tuesday and is now batting .383 for the season.

Carson bowed out Tuesday with a 3-2 loss at St. Stephens in eight innings.

The Cougars (9-5) led 2-0 early and got a stellar pitching effort from Hayden Simmerson, but the bats were quiet.