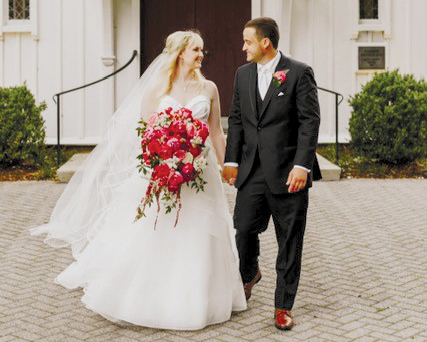 Parker Williams and Cameron Hassard were united in marriage on May 29, 2021 at St. Mary’s School Chapel in Raleigh by Rev. Perry Hardison. The 5 p.m. ceremony was followed by a reception at Melrose Knitting Mill, in downtown Raleigh.

The bride was escorted by her father, Gregg S. Williams. Maid of honor was Asia Kemp of Asheville. Serving as bridesmaids were Caroline Parrott of Salisbury, Katy Wolfe of Spartanburg, S.C., Grace Fulbright of Salisbury, Emily Goddard of Salisbury, Amanda Hassard of Charlotte, and Noel Hudson of Durham.

The bride is the daughter of Gregg and Lauren Williams of Salisbury, and the granddaughter of George Hines and the late Nancy Hines of Salisbury, and Frances Williams and the late Herbert Williams of Raleigh. She is a 2015 graduate of West Rowan High School and a 2019 Summa Cum Laude graduate of the University of North Carolina at Charlotte where she earned her Bachelor of Science in Health Systems Management with minors in Public Health and Biology. Entering her final year of law school at the University of North Carolina at Chapel Hill; she is currently working as a summer intern with PRA Health Sciences in Raleigh.

Following their ceremony, the couple took a quick trip to Charleston, S.C., and hope to plan a trip abroad next summer! They will reside in Raleigh.