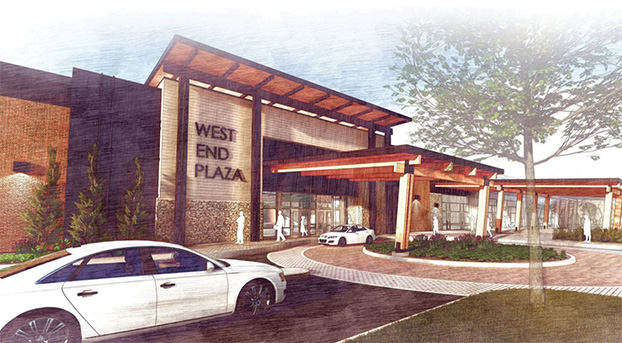 An exterior look at one of the proposed entrances to West End Plaza.

SALISBURY — The Rowan County Board of Commissioners on Monday evening voted to move forward with plans to transform a portion of West End Plaza into an agricultural center and meeting hall.

Commissioners made the decision after receiving a presentation from ADW Architects, the Charlotte-based firm hired in 2019 with designing the renovations to West End Plaza. Phillip Steele, senior principal with the firm, brought commissioners up to speed on the plans which were put on hold last year due to the pandemic.

The designs call for about 63,000 square feet of West End Plaza to be converted into a 44,000-square-foot meeting hall and 18,000-square-foot office space. The meeting hall would be able to seat as many as 1,600 people and could be rearranged into smaller meeting spaces. The office space would serve as home for agricultural agencies such as Rowan County Cooperative Extension, Forestry Service, Soil & Water Conservation and the U.S. Farm Service Agency. The renovations also entail an outdoor covered patio and a lawn area with an outdoor classroom for agricultural education and community concerts.

ADW Architects broke the project into multiple pieces called “alternates,” including a base project that makes interior renovations to create the agricultural center and meeting hall and three alternates for other improvements to the exterior facade, entrances and parking lots around the building. 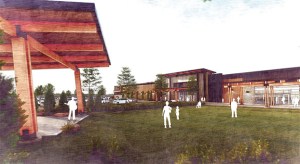 Plans for West End Plaza include an outdoor lawn space with a covered classroom and concert area.

“If you did this last year, you would’ve saved $3.5 million dollars, potentially,” Steele said.

The steep increase in price in just a year, Steele said, is due to the cost of lumber, steel and other building materials skyrocketing as a result of supply shortages and demand caused by the COVID-19 pandemic.

By voting to move forward with the project Monday evening, commissioners didn’t commit the county to paying $24.4 million for the project. The board won’t officially approve the project until the spring, at which point the price of building materials may have changed.

“To be fair, there is hope across the construction industry that costs will begin to come down,” Chairman Greg Edds said.

Steele said he believes the cost will come down, but he isn’t sure how much.

The price could also be lowered by cutting out or delaying some of the alternates, which could save the county several million dollars. However, Steele said he would recommend that the county go through with the whole project as planned. 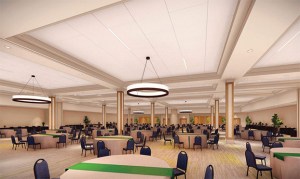 A view of the meeting hall space in a banquet format.

“The parking lot is not pleasing at all, the aesthetics of the building need to be enhanced,” Steele said. “If you want to do a nice facility and put a nice meeting hall in this facility with agricultural offices, I would think you would want to do it all at once.”

“While these budget numbers we have are huge, we’re not too far from being able to do this project,” Greene said. “I just want us to do it right if we’re going to do it.”

In anticipation of the project, the count has been transferring money each of the last three years into a savings account. That account currently contains $6.03 million. Commissioners also planned for $15 million in debt in the current budget for the West End Plaza project.

With the money the county already has saved and plans already in motion, Edds said he didn’t see why the county shouldn’t move forward with the project.

“I’m excited about this,” Edds said. “Like (Commissioner Judy Klusman) said, I think this is something we can be proud of that will bring activity not only to this community, but this side of town.”

The Board of Commissioners voted to approve the project by a 4-1 vote. Commissioner Craig Pierce was the lone dissenting vote. Pierce joined the meeting virtually after his driver’s license was revoked when he was charged last month with driving while intoxicated. He is scheduled to make his first appearance in court on July 30.

With the board’s approval, ADW Architects will move forward with drafting more intricate designs for the project. Commissioner Mike Caskey said he would like the designs to increase the connectivity between the proposed agricultural center and the other portions of West End Plaza.

According to the timeline provided by Steele, the county should be able to start bidding the project in April 2022 and start construction as soon as June 2022. The project, he said, could be completed by July 2023.

In other meeting business:

• Commissioners received a presentation from Rowan Economic Development Council President Rod Crider and Vice President Scott Shelton on the organization’s progress to maintain and foster new economic development in the county. Crider reported the Rowan EDC helped generate 492 jobs and $95 million in capital investment in fiscal year 2020-21, which ended on June 30. The Rowan EDC, Crider said, has also raised $1.2 million for its Forward Rowan campaign. The campaign allowed the organization to move from being solely funded by the county to being a public-private partnership. Through the Forward Rowan campaign, the Rowan EDC has created programs such as its online job portal.

Shelton provided an update on the Rowan EDC’s efforts to recruit new companies to the county. In the previous year, Shelton said, the county had 133 total leads on interested new companies, up 49% from the year before. Despite the pandemic, Shelton said there were also 15 company visits, matching the total from fiscal year 2019-20.

Commissioners praised the Rowan EDC’s for its work to bring economic development to the county and congratulated Crider and Shelton on the progress they’ve made.

• Commissioners authorized the county to solicit bids for project to create an access road from Julian Road to the Rowan County Animal Shelter and the new Dog Adoption Center that is currently under construction on the property. The project is being managed by McGill Associates. Water and sewer lines would also be extended to the animal shelter in the project. Plans for the road include an access point to James River Equipment, a John Deere dealer located near the shelter. James River has agreed to pay $59,000 for the project, County Manager Aaron Church said. The remainder of the project would likely be funded by the county.

• Commissioners approved the purchase of 18 vehicles, including 14 Dodge Durangos and four Dodge Chargers, for the Rowan County Sheriff’s Office. The vehicles will be purchased at a total cost of $572,730 from Ilderton Chrysler Dodge Jeep Ram in High Point. The 14 Dodge Durangos will cost $33,677 each and the four Dodge Chargers will be $25,313 each.

• Commissioners authorized Church solicit proposals from registered lobbyists to work with Rowan County. After discussing the idea of hiring a lobbyist to advocate for the county’s interests on the state and national level last year, commissioners included $60,000 for lobbying services in the current fiscal budget.

• Commissioners approved a request from District Attorney Brandy Cook to hire two assistant district attorneys to “assist in the speedy disposition of cases involving a threat to public safety.” The positions will each cost the county $82,459 ($164,918 total) and the term of the agreement will be for a one-year period starting on Sept. 1 and ending on Aug. 31, 2022. There are currently nine permanent assistant district attorney positions and Cook is in the process of filling another position.

• The board approved a request from the Health Department to reduce the number of temporary COVID-19 related positions. Last year, the department requested 11 positions be funded using state dollars, but it’s asking the positions be reduced to 7.5 full-time equivalents. The change will reduce staff costs by almost $120,000 per year.