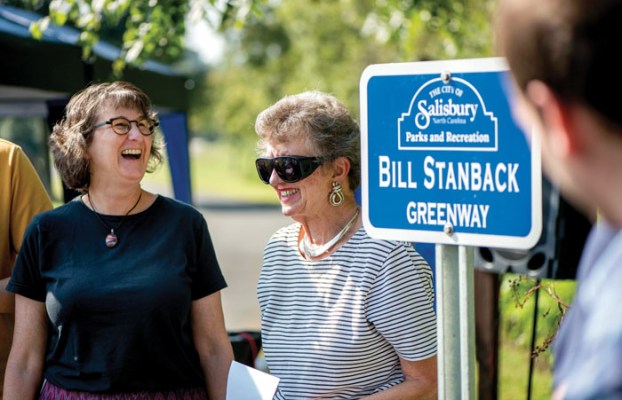 JON C. LAKEY / SALISBURY POST Nancy Popkin and Nancy Hart Stanback react after unveiling the sign. Friends, family and City of Salisbury officials gathered on part of the Salisbury Greenway on Sept. 7, 2018, to name the Prescott/Overton portion for Bill Stanback.

SALISBURY — You could count on Nancy Stanback to look out for the underdogs.

Jason Walser, a friend of Nancy and her late husband Bill, said the couple always looked out for those to which society hasn’t given a strong voice, including Native American communities, the LGBTQ community and animals.

“They were ahead of the curve on some moral, ethical and spiritual issues,” said Walser, to whom Bill and Nancy became mentors when he led what’s now Three Rivers Land Trust.

“It’s hard to imagine Salisbury without either of them,” Walser said.

Three Rivers Executive Director Travis Morehead credited Bill and Nancy for their major contributions to projects such as the permanent conservation 2,400 acres of shoreline on High Rock Lake in 2019.

The project kept that acreage accessible to the public and protects Salisbury’s water supply. Dunn’s Mountain Park and 1,400 acres of river frontage in Montgomery County were other Three Rivers projects that benefited from the support of Bill and Nancy. Those properties were also made publicly accessible.

“They were certainly leaders and example setters,” Morehead said.

He’s hopeful others will step forward to lend their support to conservation projects, but Morehead said he’s not sure their level of support can be totally replaced.

Bill and Nancy were annual donors to Rowan-Helping Ministries as well. The couple supported the nonprofit’s general operating expenses, which ensures the shelter’s doors stay open. Executive Director Kyna Grubb said the couple’s names also are on the list of donors that helped build Rowan Helping Ministries’ original facility and the Robertson-Stanback building.

Grubb said Nancy was a friend. She recalled often seeing Nancy at DJ’s Restaurant on Sunday before the COVID-19 pandemic.

“She was always one booth over,” Grubb said. “She had so many people who admired her and would call her a friend.”

Nancy played an important role in the lives of local animals as well.

Shelter Guardians President Nina Dix said Nancy’s helped create the Faithful Friends Animal Sanctuary, secured a vehicle for Rowan County Humane Society’s Sugarfoot Express and her donation to Dix’s organization which helped make fund the creation of the Nina Dix Dog Adoption Center with the use of no tax dollars.

Dix said Nancy was also a volunteer for the nonprofit. She served on the board of Shelter Guardians and participated in adoption events, showing up in jeans and a T-shirt.

“On one hand, Nancy Stanback was a strong warrior for the protection and care of the voiceless and homeless cats and dogs in Rowan County,” Dix said. “On the other, she was a kind, compassionate and generous person who not only cared, but acted on it.”

Walser said both Nancy and Bill were passionate about protecting habitats for wild animals. The pair was concerned with more than the cute and charismatic creatures.

“They liked the underdogs,” Walser said. “They seemed to be a champion for them over and over again.”

Among the other local groups Stanbacks supported were the Salisbury Symphony, Community Care Clinic, Piedmont Players and Bell Tower Green.

She supported higher education institutions such as Catawba College, Livingstone College and Hood Theological Seminary. She also supported Brevard College, where Bill was a member of the Board of Trustees.

She was given the key to the City of Salisbury in 2021 in conjunction with the addition of the Stanback name to Bell Tower Green.

Among others, Nancy is survived by are her children Mary Hart, John Hard and Charlotte Hart Scudder, her three step children Anne, John and Mark and 10 grandchildren.