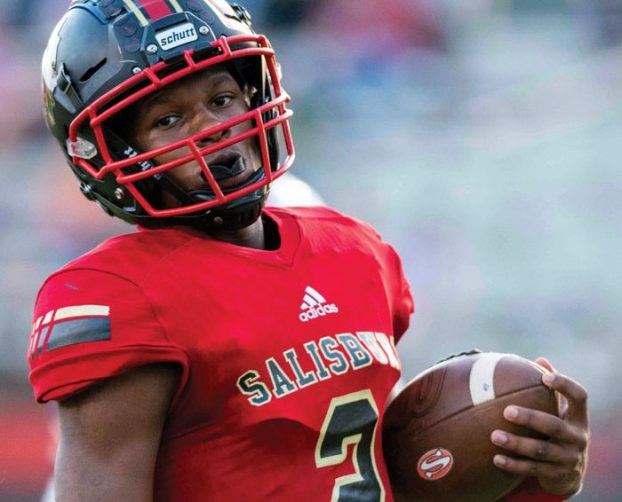 The 1995 Hornets, who went 12-1, started their season by outscoring Lexington, Davie County and East Rowan by a combined 112-0. The current Hornets have outscored Polk County, East Rowan and South Rowan 162-0.

Salisbury, ranked No. 1 in 2A by MaxPreps, needed only a few seconds to get the avalanche started. Jayden Gibson took the opening kickoff near the Salisbury 10 and went all the way.

Salisbury quarterback Mike Geter owned scoring runs of 27 and 29 yards by the end of the first quarter, and the Hornets led 22-0.

Salisbury’s defense backed up South in the second quarter, and the Hornets took advantage of a short field to make it 29-0. Geter threw a touchdown pass to Deuce Walker.

South Rowan (1-3) didn’t quit and made a goal-line stand late in the first half. The Hornets were denied a touchdown, but Wade Robins’ field goal made it 32-0 at the break.

South made only one first down in the first half.

Salisbury’s defense stopped South again early in the third quarter, and Marcus Cook returned a short punt for a touchdown.

Cook got his second touchdown on a 32-yard pass from Geter for a 46-0 lead. That triggered a running clock with 5:10 left in the third quarter.

Aquiles Bernal had a sack for the Raiders. Quarterback Bronson Hunt was the most effective offensive player, but had some big gains negated by penalties.

Salisbury hosts Thomasville in what should be one of the more challenging Central Carolina Conference games for the Hornets.

CONCORD — Carson put up a good fight at Robinson, but the Bulldogs stayed unbeaten on Friday with a 22-10 victory.

Carson (1-2) played uphill the entire game. The Bulldogs (4-0) disrupted a Carson option pitch in the opening minute, and Simarion Hughes scooped and scored for Robinson.

A long pass play,with a 15-yard personal foul tacked on, helped move the Bulldogs to the Carson 5 in the second quarter. The Cougars made a defensive stand at that point, but Robinson’s made the field goal for a 9-0 lead.

Carson, a run-heavy team, was limited to 34 rushing yards in the first half by a large, quick Robinson defensive line.

One of Cook’s interceptions led to a 29-yard field goal by Luis Avilez early in the second half that cut Carson’s deficit to 9-3.

Robinson quarterback/linebacker Blue Monroe hit Hughes on a long pass play to set up a 14-yard scoring run by William Suttles for a 15-3 Robinson lead with 8:17 left in the third quarter.

Monroe scored on the ground from 8 yards out to bump the lead to 22-3.

Carson scored its touchdown with 5:30 remaining. Reserve back Makani Guida broke a 50-yard run and then put the ball in the end zone from the 4.

Robinson racked up more than 300 yards of offense. Monroe threw for 202 yards, mostly to Hughes and AJ Howard.

Carson was 0-for-6 passing with two interceptions.

QB Hunter Burris rushed 16 times for 63 yards. Carson had over 300 rushing yards in each of its first two games, but was held to 170 by the Bulldogs.

GRANITE QUARRY — East Rowan lost 52-7 to North Davidson, which was hungry for its first win after two losses to 4A opponents.

The Black Knights (1-2) used a big second quarter to surge to a 36-0 halftime lead. North Davidson got 10 points in the last minute of the half, including a 42-yard field goal by Riley Sullivan.

It became a running-clock game in the third quarter, and it was 52-0 when North Davidson got its last score on a pick-six by Reid Nisley with 3:40 left in that quarter.

Josh Roman-Soto, who has scored both of East’s TD this season, put the Mustangs (0-3) on the board with a rushing TD with just 20 seconds left.

East opens South Piedmont Conference play at home against Concord next Friday. North Davidson is scheduled to play at Asheville.

Alex Summers was 22-for-27 passing for a school-record 430 yards and five touchdowns. He broke the record of 413 passing yards by Chris Reynolds, who did that in a 45-42 win over North Davidson in 2016. The five TD passes tied a Reynolds record from that same North Davidson game.

Zymere Hudson had eight catches for 197 yards, and Zaharee Maddox, who had two TDs called back, also topped 100 receiving yards.

Summers and Hudson connected on an 85-yard scoring play in the second quarter.

Tate Carney rushed 21 times for 185 yards and scored three touchdowns. He has 66 TDs for his career, one short of Cooter Arnold’s school record. He has 3,582 career rushing yards.

The War Eagles led 17-0 after the first quarter, but Mooresville (1-2) was able to make things interesting.

Mooresville got within 44-34 with a score with 2:08 remaining, but the Blue Devils failed on a 2-point conversion pass that would have gotten them within eight points.

Davie then put the game away on a 52-yard scoring run by Carney.

Jawarn Howell had 125 rushing yards for the Blue Devils.  Jamere Cherry threw for 160 yards. Davyn Reid had 104 receiving yards and ran back a kickoff 99 yards for a touchdown when Mooresville was down 31-7.

A.L. Brown (3-0) was off Friday and opens Greater Metro Conference Play at Hickory Ridge next Friday.