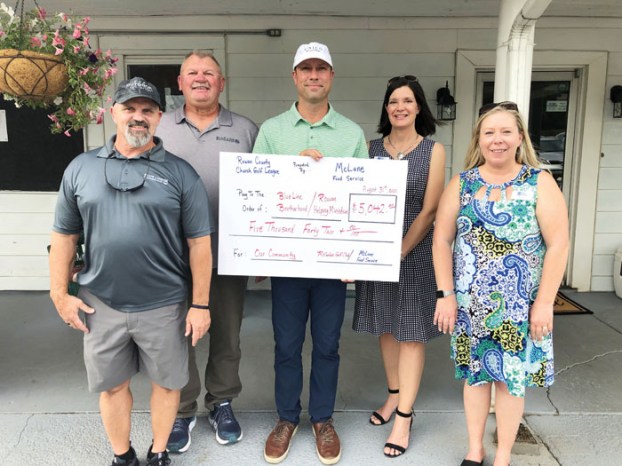 The Rowan County Church League set several records this summer as teams gathered weekly to play golf and raise funds to help those in need.

Sixteen teams played in the league, the most teams ever in the league’s 16-year history. The league logged another record, raising $5,042 for two local charities, Rowan Helping Ministries and Blue Line Brotherhood.

“This is the most we have ever raised for charities in the history of the league,” said Scott Perry, league founder and general manager of the league’s home course, McCanless Golf Club. “That’s because in the past few years we have engaged a title sponsor and this year our title sponsor, McLane Food Service, surprised us by doubling the amount of the sponsorship we requested.”

Over the past 16 years, the church league has donated almost $40,600 to local charities, with Rowan Helping Ministries chosen as beneficiary for many years of the tournament, Blue Line Brotherhood was new as a beneficiary in 2020.

“We are blessed to have the support of our local churches and the golfers who play in the Rowan County Church League,” said Kyna Grubb, executive director of Rowan Helping Ministries. “Religious congregations are a vital source of financial, in-kind, and volunteer support for our organization. We could not exist without their involvement.”

Over 1,400 households in crisis received nearly $1,618,048 in financial assistance, and 541 guests were given a safe place to spend the night. The agency also provides practical life skills training for shelter guests and a transitional housing program for single-parent families and individuals who are homeless but working.

The Rowan County Church Golf League plays May through August. Those interested in joining the league can contact Perry at 704-637-1235 or themacgc@gmail.com .