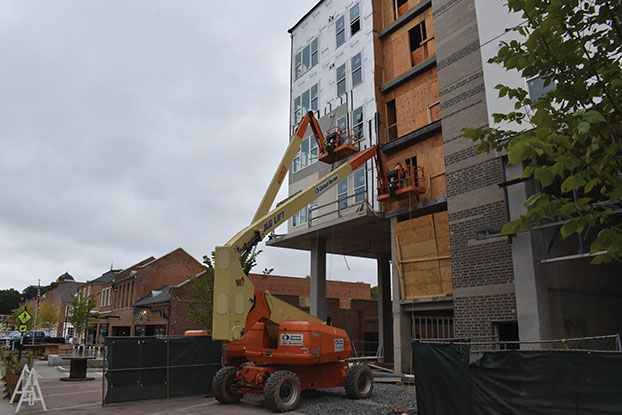 Affordable housing units aren’t usually at the top of economic development conversations, but they should be if 1,000 or more jobs come to town with an average wage of $16 per hour.

Those salaries were quoted as the minimum for a massive new speculative building on Webb Road, and it’s in the same range as starting pay for workers at Chewy’s warehouse, according to the company’s jobs portal. While exact job figure for the speculative building won’t be decided until a tenant moves in, it’s reasonable to assume developers and elected officials are hoping for at leastseveral hundred because of the building’s proposed size of 675,000 square feet.

Both projects could be feathers in the cap of a re-election campaign for a Rowan County commissioner, but the salaries are not going to buy a spot in new housing developments being built with price tags from $200,000 to $300,000. A $16 per hour wage also may not stretch to cover rent in a downtown Salisbury building, especially the Empire Hotel, which will require an investment too large for rents to be affordable for most people.

Naturally, developers need to recoup their investment through rents and commercial leases to make the project worthwhile, but that sometimes leaves renters with relatively few affordable and attractive options.

The city of Salisbury has done a good job of talking about housing issues and looking for solutions. It formed a commission that continues to examine data about housing in Salisbury. Elsewhere in the county, it’s usually absent during conversations about new jobs coming to town. That’s problematic because it leaves open the possibility that people will be forced to rent too-expensive apartments or houses.

Think about the speculative building as an example. Based on a 40-hour week, someone making $16 per hour should expect about $2,600 or $2,700 per month (depending on how paychecks fall) before taxes and other standard deductions. That person will need to find a place with a rent payment of about $780 or $830 if they’re planning to follow the rule of thumb that no more than 30% of gross income should be spent on housing costs. A quick online search will turn up options available now. A key for renters, however, is whether the property is available when they need it and whether the landlord is OK with waiting for the tenant to move in.

In Salisbury, city staff presented data earlier this year showing cost burden is the biggest issue. About 17% of households require 30%-50% of their income for housing costs. Another 19% have housing costs more than half their income. While about 70% of housing units in the county are owner-occupied, results are probably replicated for renters in communities within Rowan County.

Some people have options to deal with higher-than-desired rental costs, including finding roommates or living with family. Others will move up from lower-paying jobs and already have places to live. Those are not solutions in every case.

Reasonable people also might argue, “What are elected officials supposed to do about it?” The answer lies in the value of elevating something to the forefront of public discourse. With data, developers will have a clearer picture of consumer demands. Elected leaders can also approach developers with relevant questions to ask about their interest.

Data will also help county and municipal leaders prioritize housing on their to-do list. In Salisbury, data showed housing is an issue in need of significant attention.

Some housing problems will be solved by affordable units just completed or currently under development. Britton Village on Statesville Boulevard added about 80 units. The city this year also approved a combined 168 new apartment units for low-to-moderate-income families at two complexes off of Jake Alexander Boulevard. But there are certainly people in Salisbury and Rowan County who are paying more than 30% of their income in rent and wouldn’t qualify for affordable housing. Those folks simply need housing that’s affordable and available — not housing that meets the federal government’s criteria.

To the degree that apartments are going unfilled, the solution may be similar to the aggregation tool the Rowan County Economic Development Commission developed for jobs. There are a plethora of locations to look for apartments — websites of realty companies, Craigslist, the Post’s classifieds, Facebook and apartment rental websites. Sometimes, the only way to find out about rentals is a sign in the front yard. It’s a particularly tough market for people moving to Salisbury and Rowan County from elsewhere.

A report titled “Analysis of Impediments to Fair Housing Choice” for 2016 through 2020 offered another solution for unincorporated areas: “The lack of municipal water or sanitary sewer service throughout the rural areas of the county limits single-family densities and the ability to create multi-family housing.”