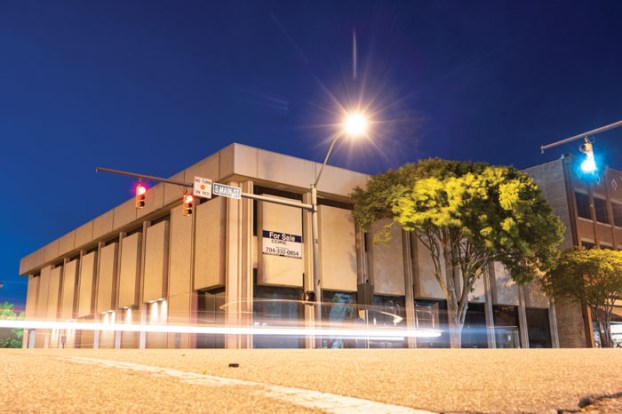 Josh Bergeron / Salisbury Post - In this long exposure photo, a car drives down Main Street in front of the former Wells Fargo building on Wednesday night. The building has since been purchased by local businessman Greg Alcorn.

Alcorn, the founder and CEO of Salisbury-based Global Contact Services, didn’t want to put just anything in the roughly 25,000-square-foot structure that he has renamed 130 Parkview. He wanted to bring to life a vision that was “right” for Salisbury. Gianni Moscardini, owner of La Cava and chairman of Downtown Salisbury’s Board of Directors, had just the proposal for him.

Working with a subcommittee of Downtown Salisbury board members, Moscardini developed the idea of a cooperative market that will inhabit the first floor of the building. Tentatively named Bell Tower Market, the co-op as currently planned will feature a butcher shop and seafood store, a convenience shop, small grocery, a cold cut deli and a wine and beer store.

“I firmly believe that this is what we need downtown right now,” Moscardini said.

The subcommittee conducted a feasibility study to see if the idea was financially viable and Carrol Fisher Construction drew up a preliminary blueprint. Plans for the co-op show two common corridors connecting six different vendors while providing passage from Main Street to the building’s back parking lot and Bell Tower Green beyond.

“We were just looking for something that would create a gateway between the park and downtown and not compete with the restaurants, but still fill a need for visitors and the increased number of people living downtown,” Alcorn said.

At a combined 2,601 square feet, the butcher shop and fish market will dominate the middle of the space. The produce market, cold cut deli, bodega and wine shop will take up roughly 4,300 square feet on one side of the building. Each vendor space will be rented individually and likely be priced between $12-16 per square foot per year. Restrooms available to patrons of the co-op are included in the plans as well. The 51 parking spots behind the building will be solely dedicated to the vendors inside.

Moscardini envisions the butcher shop and seafood store carrying a variety of fresh meats and fish while the bodega will sell “whatever people might need.” The deli will offer meats, cheeses, breads and other sandwich necessities and the produce market will have fresh fruits and vegetables. The wine and beer shop will be located in the former Wells Fargo bank vault and will contain tables and chairs for those who wish to linger while enjoying a beverage.

The second floor of 130 Parkview contains four office suites. One of those spaces is currently occupied by the nonprofit Families First and Alcorn is looking for tenants for the other three. The basement of 130 Parkview will serve as storage for the co-op vendors.

While Moscardini and Downtown Salisbury have developed a clear vision for the co-op, their plans are still malleable.

“This is preliminary, so if someone needs more space we can adjust,” Moscardini said. “If someone says it’s too much space for me, we can give them a little bit less. We can adjust it. Right now it’s an empty slate.”

By bringing multiple vendors under one roof, Alcorn said he hopes to attract more people downtown.

“I want to see more activity downtown and if it was just going to be a single tenant that had no generation of foot traffic to it, then I don’t think that would be in the best interest of the park as a subset of downtown,” Alcorn said.

Alcorn also imagines the co-op serving the downtown area’s residential population, which is poised for growth. In addition to apartments being added at Bankett Station and the Bell Block Building, a Charlotte-based developer also plans on adding about 40 more apartments in the Empire Hotel, which will also be renovated as a boutique hotel with a restaurant and bar.

“I’m in a hurry,” Alcorn said. “I want to get it done by next year so we can create this atmosphere that the park is going to provide. I’m optimistic this will complement what’s going on with the Empire and all of downtown. It’ll be a nice little synergy.”

Editor’s Note: This article has been updated since its publication to indicate the correct asking price range for each of the spaces in the marketplace.